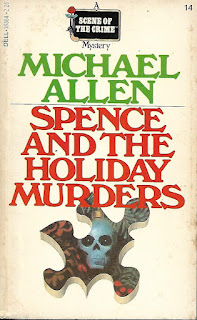 This is the first book of three which Allen wrote about Superintendent Ben Spence and it's the last of the three that I was able to get my hands on. In fact, I believe I read the trilogy in reverse order.

Spence's debut is made at Christmas time. Just three days prior to the holiday, Roger Parnell, a local businessman and playboy, is killed in his driveway. Someone caught him from behind with the proverbial blunt instrument before he could find the right key to unlock his front door. When the milkman first spotted him laid out in the drive, he thought Parnell had been celebrating a little early and a little too hard. But the blood beneath his head told a different story.

Spence is breaking in a new Detective Inspector and as they begin the investigation Inspector Laurel learns that Spence isn't a man to hurry things along and he's definitely not going to jump to any conclusions. Interviews always take place twice--because you never know what a witness/suspect might remember or let drop in a second round of questioning. They soon learn that while Parnell was an attractive, smooth single man with wads of money at his disposal, he was also a bit of conman....staying just barely on the right side of the law. Not to mention a bit of a cad and a peeping tom too boot. He made plays for the young women at the nearby school (but only those of legal age...) and was the love 'em and leave 'em type. He also managed a second mortgage scheme that put his clients in deep trouble over late payments as well as an iffy bathroom remodel business. There are plenty of people who might have taken offense at the way he handled women and business. But was anyone upset enough to kill?

This was an interesting police procedural which is a window on the past. There are a lot reminders of behaviors that were perhaps not acceptable then, but blinked at. The plot and narration reminded me a great deal of Dragnet at its best. It is bare bones detection ("Just the facts, Ma'am") and yet the characters are interesting. I particularly enjoyed watching the way Spence worked with the new man and the way he carried out his interviews. Allen did a fine job spreading the suspicion around so we had plenty of potential suspects in the mix. What keeps this from being a full four star book was the explanation of the motive and the actions of the killer that night. I realize that people kill for all kinds of motives that may seem inadequate to others, but generally speaking the motive at least seems to fit the character of the culprit (if the author gives adequate information on said character). I certainly can imagine the guilty party killing and I can even imagine them killing Parnell...just not for the reason given and not carrying it out as explained. ★★★ and 1/2

First line: If Roger Parnell had known that he was going to be murdered in two and a half hours time he would undoubtedly have paid more attention to the stripper who was featured in the ten o'clock cabaret at Big Fat Nelly's nightclub.