Murder under the Mistletoe 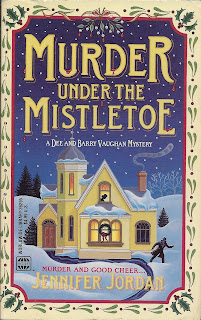 Murder under the Mistletoe by Jennifer Jordan

Barry and Dee Vaughan take a holiday in Italy where they get their first glimpse of Miranda Travers. A fashion model with even more good looks than your usual runway beauties and with men swarming like bees round a bee hive. She's got two men on a string as potential husbands and a few others who'd love to shove the top contenders out of the way--including Morgan Grant who, oddly enough, she's gives little encouragement to. Even Barry feels the effects of her charm.

The Vaughans return home and forget about Miranda Travers...until she shows up later that year at the same country hotel where Barry and Dee have decided to spend the Christmas holidays. Once again she has all the men dancing attendance and it looks like she's going to add another feather to her cap by luring young Gabriel Field away from Joyce Bradley (if only temporarily). She even creates a stir between the two young men in the antique business. Major Henry Gardner seems to have her measure, but even he isn't immune to a beautiful young woman. When her Italian beau (possible husband #2) sends her a rare statue as a Christmas gift, she longs to show it to someone. But when she's found dead on Boxing Day and the statue has disappeared, one has to wonder if she showed it to the wrong person. Was she killed for the art piece or for the way she toyed with men's hearts?

I feel like I should have liked this more than I did. After all, it's got an academic-type--Barry is a History teacher who writes mysteries on the side. Barry and Dee are likeable people with a nice little dog named Bella. And the country hotel at Christmas setting is a nice backdrop for a bit of murder and mayhem. There's a decent sprinkling of culprits...though not quite enough with strong enough motives. But it just doesn't click. I don't buy into Barry and Dee as amateur sleuths. Even the fact that Barry writes murder mysteries and this supposedly gives him insights into motives and whatnot doesn't really help. It takes for-ev-er to get to the murder. As the first line below indicates, we have to start off with a detour to Italy first. And, sure, it gives us a bit of background on our victim, but not anything that we couldn't have picked up one way or another at the hotel. I get the feeling that Jordan wasn't real keen on her amateur detectives either, after all, she published this one in 1989 and apparently abandoned the murder ship. The set up with Barry and Dee and their pet Inspector Ken Graves, makes one think that a series was intended. But I think it just as well that it didn't happen. ★★

First lines: It all started in Spring. In Italy--Florence, to be precise.

Always tell women what they want to hear, when there is no fear of them taking you up on it. (Barry Vaughan; p. 101)