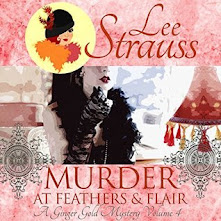 Lady Ginger Gold has opened a new dress shop in Regent Street called Feathers & Flair and plans to kick things off with a gala event. She'll have designer dresses for the well-to-do as well as well-made clothing in the off-the-rack section for those who can't afford a frock from Paris. She's also arranged for a well-known Parisian designer to give a debut viewing of some of his latest models. Everything is set for a breath-taking evening.

There is a terrific turnout with everyone from a former German princess to a Russian duchess attending--along with the elite of British society. The event goes well, several purchases and orders are processed, the guests leave for home, and Ginger is breathing a sigh of relief when her shop manager discovers the Grand Duchess Olga Pavlova Orlova lying dead behind the curtain leading to the backrooms. Not only has the Grand Duchess been murdered, but the fantastic blue diamond necklace which had been on display around her neck is gone. Was the lady killed for the Blue Desire, a jewel which carries (as so many of these fabulous gems do) a history of bad luck for its owners? Or is there something else behind the Russian's demise? When a coded message is found hidden in the Grand Duchess's shawl, it begins to look like the lady has been playing in the spying game.

Ginger dives into sleuthing once again--this time with two investigations vying for her attention. Her sister-in-law, Felicia has asked her to look into the disappearance of Angus Green, an actor in the repertory theater group which Felicia has joined. Felicia and Angus were in the middle of a play run with two more performances left. Others think that Angus was just a flighty young man and took off for his own purposes, but Felicity does not believe that he would let his fellow actors down. She's convinced something awful has happened to him. When another actor in the group disappears as well, it begins to look like something is rotten in the acting circle. Ginger is going to have her hands full and a lot to think about...and then, of course, there is the complications in her personal life.

Her previous investigations put her in close contact with the very personable and handsome Inspector Reed. Reed has been separated from his wife (due to her romantic indiscretions) and has given Ginger to understand that a divorce is in the offing. So...why did he show up at the dress shop gala with his wife? It seems that Emelia Reed has begged forgiveness and asked for a second chance. Reed is torn and Ginger is faced with the fact that she loves a man who still very much belongs to another. It puts a strain on their detective co-op. But the duo do find a way to work together and eventually bring the culprit to justice.

I think this was Strauss's best effort at mystifying me. Even though she plainly displayed two clues that should have told me who was responsible, I managed to disregard them. Well, not entirely, I did pay attention to one clue...for about two seconds. It didn't seem to lead anywhere so I promptly forgot about it. I could blame it on listening to an audio version (I don't seem to take things in quite so well if I don't actually read the words), but I don't think that's the reason. I just hang on to it and put it together with the other clue. One interesting note on this installment...it's a cliffhanger. The missing actor storyline doesn't get resolved and we're left with a tantalizing episode at the end that leads into the next book. ★★★★

Last line: Ginger grabbed at the string of beads around her neck. "Oh, mercy."

Thanks Bev for the review. 😊 Sounds like the better puzzles in this series are SS Rosa and Feathers & Flair? Is it possible to start with either of these, rather than the opening entry in the series?

Jonathan: It doesn't really matter which you start with--unless you're keen on following the developing relationships between Ginger and her sister-in-law and Ginger and the inspector. You will want to read Feathers & Flair before next one since Murder at the Mortuary is a sequel to events in this one.