Mystery of the Haunted Pool 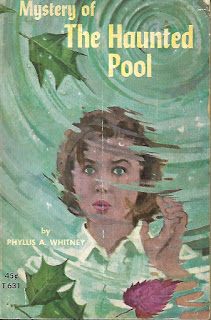 Mystery of the Haunted Pool (1960) by Phyllis A. Whitney

Susan Price leaves New York City at the beginning of summer vacation and journeys up the Hudson River to the little town of Highland Crossing owns an antique shop. Susan's father is ill and need of a country home to recuperate and her Aunt Edith has been trying to convince Captain Dan Teague to let her and the Price family move into his big house. Captain Dan is in need of money, but he and his grandson are reluctant to lose the family home. It's hoped that Captain Dan will take a liking to Susan and be persuaded to rent his house.

In addition to being interested in all the odd antiques in her aunt's shop, Susan becomes interested in some of the unusual people in the village, including a middle-aged spinster who wears the most unusual clothes and Captain Dan's grandson Gene who must wear a brace on his leg and has a huge chip on his shoulder. Miss Altoona, the oddly clothed spinster, is most insistent that she must buy a barrel of books Aunt Edith has been given by Captain Dan to sell and then later Susan finds Miss Altoon hiding in the underbrush keeping watch on the Teague house.

When Captain Dan finally agrees to let his house to the Prices, the mystery really heats up. On the first night that she and her aunt sleep in the house Susan hears strange noises, The two investigate and find an open window....and ominous signs on the living room floor. The most frightening thing for Susan is the face she sees in a pool on the grounds. A face that stares up at her through the water and then disappears.

Susan's brother joins her in Highland Crossing. Together, the two of them win Gene's trust and then the three of them learn that there are clues to a Teague family secret hidden in one of the ancestor's captain's log and in a secret room--but not before a fire in Miss Altoona's house ironically sets everything right.


I read Phyllis A. Whitney when I was on my romance/romantic suspense kick back in my teen years. I discovered her brooding, handsome heroes and damsels in distress at the same time I was reading Victoria Holt and others in the gothic line. I never knew that she wrote straight juvenile mysteries--which is a shame because I would have enjoyed them when I was young.

This is a fine example of the mysteries of the time--simple, straight-forward stories in a nice small-town setting. It's also easy to see why it was chosen for an Edgar Award in 1961 for Best Juvenile Mystery. Whitney's descriptions of people and settings are always excellent, whether in her adult suspense or in this mystery aimed at the younger crowd. she gives a real sense of the small town of Highland Crossing and sets the stage for low-key suspense. I enjoyed the characters of Susan and her aunt--and Susan's interactions with Gene as she tries to break through his defensive shell. The mystery wasn't difficult, but one doesn't really expect intricate puzzles in juvenile mysteries. ★★★★

[First line] The air-cooled bus had followed the west bank of the Hudson River all the way from New York City, and Susan Price had loved every minute of the journey she was taking by herself.

[Last line] What a wonderful way to end the summer!

I certainly remember this one...I read it from a classroom library (do these still exist?), rather than owning a copy.

Todd, there are still some teachers who keep classroom libraries. I have a friend who teaches and stocks her own.

It may well be that our school library had Whitney's mysteries, but I never discovered her then.

I don't remember this one but read all of Phyllis Whitney's children's mysteries from my library! I did not like her gothics as much but also enjoyed a YA called The Highest Dream about a girl who gets a job as a tour guide at the United Nations. It made such an impression that years later when I saw the UN for the first time I immediately wanted a tour.