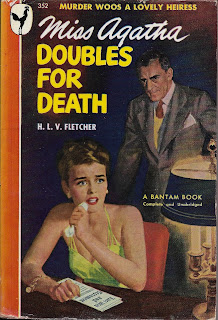 I know I should have had a nice young man handy, and we'd have gone round asking questions and finding clues, and in the last chapter, when we'd trapped Stephen, we'd have fallen in one another's arms. But there was no nice young man, and I don't like detective stories, and even if I could have proved Stephen's guilt, I don't know that I'd have wanted to. It wouldn't help Uncle Richard or Uncle David to have Stephen hanged.
~Ann Hughes
Miss Agatha Doubles for Death (1947) by H. L. V. Fletcher


Miss Ann Hughes, beautiful young heiress to a fortune in Wales, suddenly decides to visit her several-times-removed cousin Agatha Hughes in West Virginia. Miss Agatha is a shrewd, older woman (though how much older we're not told) who quickly realizes there is more than an eagerness to meet a long-lost relative behind Ann's arrival. After a little gentle prodding, Ann reveals that she has left Wales because she fears for her life. She's quite certain that her cousin Stephen has killed their two uncles and that she is next on his list. Stephen is a gambler and not just for money--he likes a good gamble in life as well, giving him the perfect amount of nerve to pit his wits against his victims and any detectives who might get on his trail

Not that anyone officially suspects him of a crime. Just as Ann is certain that murder has been done, she's also certain that he has cleverly arranged things so no one would ever take an accusation of murder seriously. No one that is except Miss Agatha Hughes. Miss Agatha likes her new-found cousin and sees a lot of herself in Ann. She believes Ann absolutely when she says that Stephen is a murderer who is out to murder again for inheritance. But she's not sure how to help Ann.

The next thing we know Ann has been declared dead after an accident on the West Coast. Ann had always wanted to drive west to see friends in Hollywood. So she bought a car and did just that. But something went wrong and she died in a car accident. Miss Agatha goes west (apparently to identify Ann and bury her--though we're not told so specifically) and, immediately upon her return home, informs her lawyer that she's heading to Wales.

Now, one thing I should explain about Agatha Hughes. She is an invalid. She lost the use of her legs after an emotional shock when she was younger and never regained it. So, she's confined to a chair. She's a determined lady--in more ways than one--and has never let her disability prevent her from doing precisely what she pleased. The lawyer is aghast that she wants to go traipsing off to the British Isles with no one but her life-long companion/maid, but he knows better than to argue with her. She wants money made available for a trip to Wales? She's got it. She wants to buy the Hughes family home in Wales and set up house there for a bit. No problem.

So off she goes. And she meets up with Cousin Stephen. After they have time to get acquainted, she gives him every appearance of being quite taken with her last remaining relative. She even tells him that now that Ann is gone she has made a will in his favor and plans to send it off to her local lawyer immediately. She practically broadcasts her willingness to be his next victim. But Stephen doesn't know what an acute mind his American cousin possesses and he may not be prepared for all she has planned.

This really is quite an interesting mystery from Fletcher--an author who was from Wales himself (thanks to Bill Picard in the Golden Age Facebook group for that tidbit). There is never any question who the criminal is nor what his motive is. The real mystery is whether he will pull off one last murder or if Agatha will manage to turn the tables on him. And if she does just how she will do it. The reader is definitely rooting for Stephen to have a dose of justice served up to him, but it is improbable that any but the most discerning reader will figure out precisely what will happen in the last two chapters.

A quite satisfying read. Fletcher writes very vividly of the Wales setting and, though not American, also writes the American portion very well. I enjoyed this one very much.★★★★

***************
All Challenges Fulfilled: Just the Facts, Mount TBR, Calendar of Crime, Craving for Cozies, Cruisin' Thru the Cozies, Cloak & Dagger, 52 Books in 52 Weeks, Adam's TBR Challenge, Outdo Yourself, How Many Books, Medical Examiner, Reading Road Trip
Deaths = one drowned, one poisoned, one dead in a fire
Calendar = December: word starting with "D"
Author from Wales

I bought this book months ago and kept planning to read/ review it. BUt as usual I found other writers who I nneded to explore. I skipped to your star rating and didn't read a word of your post. (forgive me, but I want to approach the book fresh.) Now seeing your very high rating I think I'll be packing this for the plane trip for our upcoming vacation this weekend. My post will be up in June.

John: I do hope you enjoy it. I really did--and I'm hoping I didn't rate it higher than I should have just because it was so much better than the string of duds I've been having trouble getting the reviews up for.

Hope you have a good trip!

Never heard of this author before, so thanks for bringing them to my attention, especially since the book seems rather intriguing.

Kate: Hope you can get hold of a copy and will enjoy it if you do.