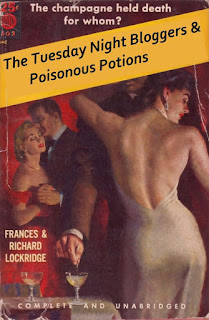 For the month of July The Tuesday Night Bloggers have chosen a theme with a bit of bite to it. We will be examining poisons, poisoners, poisonous atmospheres, maybe even poison pens--if it can be connected to poison in any way, it can be talked bout this month. Once again I will be collecting the essays here at the Block. If you'd like to join us as we focus on a month of poisonous mayhem, please stop by for group discussion and I'll add your posts to the list. We tend to focus on the Golden Age of crime fiction--generally accepted as published between the World Wars, but everyone seems to have a slightly different definition and we're pretty flexible. Essays on more recent crime fiction are welcome as well.

This week's Poison Experts:
Brad at ahsweetmysteryblog: "Pick Your Poison: Shirley Jackson's We Have Always Lived in the Castle"
Kate at crossexaminingcrime: "My Favorite (Fictional) Poisonings"
JJ at The Invisible Event: "P.G. Wodehouse Defames the Detective Story in 'Death at the Excelsior' (1914)"
Curtis at The Passing Tramp: "Hold the Oysters! Part 2 R in the Month (1950) by Nancy Spain"
John at Pretty Sinister Books: "The Poisoner's Mistake - Belton Cobb"

Last spring I took up my second Clyde B. Clason and read his Poison Jasmine (1940) which features poisoning among a group of perfume manufactures.

Clason's detective--Theocritus Lucius Westborough, historian by trade and solver of impossible crimes by instinct, receives a telegram from world-famous perfumier Etienne LeDoux asking him to come to his home in Valle de Flores, California to investigate an attempted poisoning...of himself. Someone put a deadly additive in his pre-meal tonic, but fortunately it wasn't quite enough to kill the transplanted Frenchman. LeDoux doesn't want anyone to know Westborough's real purpose and asks him to arrive under the name of T. L. West. The historian's job is to discover which of LeDoux's family or employees want him out of the way. But when the would-be killer strikes again, it isn't LeDoux but his advertising agent, Paul Michael Charmaron, who is poisoned at table with all the suspects.

The obvious suspect--and the one LeDoux picks--is Derek Esterling. Esterling is a brilliant chemist who has developed a new perfume--which uses ingredients that can also be used as a poison. Esterling is engaged to LeDoux's lovely granddaughter (who will inherit the lucrative perfume business if grandpa dies) and he had quarreled with Charmaron the night before. But Westborough thinks the clues point just a little too conveniently to the chemist. And when another murder takes place the historian is able to unravel the tangled clues and follow the thread directly to a diabolical killer.

When I read this one I felt throughout that I really ought to like it a lot more than I did. That's not to say that I didn't like it--I do. Just not as much as I thought I would. We've got a good, intellectual/academic type for our detective. I love those. The plot has a clever and effective impossible crime. There's a nice bit of misdirection and clueing sleight of hand. The story has a Golden Age country house feel to it--closed set of suspects all gathered together for murder and mayhem. All the pieces are there...and yet it didn't quite knock my socks off. I'm not sure if it's because it seemed to go a bit too long or if it was all about me and the fact that at the time I read it I record that it was an out of sorts kind of week. Regardless--Clason is generally a fine entertainer in the mystery realm and I suggest you give this one a try for yourself.
Posted by Bev Hankins at 11:48 AM

Please include mine for this week, Bev:

The Poisoner's Mistake by Belton Cobb

I posted a rerun, too. But I added more info and included new DJ illustrations! Maybe I'm interpreting the Tuesday Night part of this too literally. ;^)

For some odd reason, Bev, one branch of my local library has a lovely collection of GAD books, many of them from the year they were printed! And there are a great many Clyde B. Clason's on the shelf. But every time I check one out, I sit with it for a few weeks and then return it. I don't know why I can't get interested in the guy . . .

Brad, I envy you your GAD library collection. We have a pretty fantastic library here in a lot of ways--but I've been very disappointed in the way they cull so many of the older books (even in reprint editions).

And, hey, we all have our little differences in taste (see my dislike for We Have Always Lived in the Castle :-) )--so, I'll forgive you for not caring for Clyde Clason.