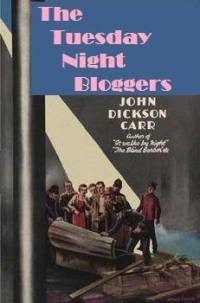 The Tuesday Night Bloggers have been meeting now for several months with a group of us who are interested in golden age detective writers. We started with Agatha Christie back in late September and October and have now found ourselves looking forward to a March full of impossible crime delight with one of the masters of the form, John Dickson Carr (and his alter-ego as Carter Dickson). If you have thoughts on JDC that you'd like to share, feel free to join us over at Noah's Archives where Noah will soon be putting up our master post for the group.
I am not as widely read in Carr as most of my fellow GAD-ers. And as I mentioned last week, spring doesn't afford me the time to read and do indepth reviews in quite the way I'd like for out TNB meetings. Noah has given us his selections for five favorite and least favorite novels by JDC. I'm not in position to give five favorites, but I can tell you my current favorite from those I've read so far. That would be The Problem of the Green Capsule which I read back in 2012

Carr is, of course, one of the grand masters of the locked room and the [apparently] impossible crime. And, of course, The Problem of the Green Capsule is another such specimen. It begins with Dr. Marcus Chesney lecturing his household and associates on the fact that eyewitnesses are unreliable--that, as has often been said, if ten people observe the same incident then ten different versions will be told. And, as he later writes in a letter to Dr. Gideon Fell, "Show them a black-and-white record of it aferwards, and they will believe you; but even then they will be unable to interpret correctly what they see."

This subject has long been a hobby-horse of his, but the latest lecture has been brought on by an incidence of poisoning his home village. One child was killed and several others became deathly ill when someone slipped strychnine-laden candies into the stock of a local merchant. The police are at a loss to find evidence enough to capture the culprit and suspicion falls upon Chesney's niece and heir Marjorie.

In order to prove his point and, as we later find out, to show how Chesney believes the poisoning to have been accomplished, the doctor arranges for a demonstration to be performed in his own home. He has three in his audience--his niece, her fiance, and a friend who is a psychologist. Harding, the fiance, is set to film the entire show. Chesney and an unknown player go through a scene in his darkened library. The doctor sits at a desk with various objects on it, pretends to write some sort of note, and then a man in coat and silk hat, muffled to his nose and wearing dark glasses and gloves, comes into the room. The mysterious figure forces a green capsule into the doctor's mouth and then leaves. When the show is over and the lights go up, the doctor dies of cyanide poisoning before he can find out how his audience has fared in their observations. Once the three observers realize what has happened, they rush outside to see if they can catch the mysterious visitor. They find his costume in a pile outside the french doors and the handyman lying prone under a tree--a victim of the proverbial blunt instrument.

The police begin investigating, but it seems that everyone who is a viable suspect has an alibi. And, as Chesney predicted, each of the observers saw things just a little bit differently. It is going to be difficult to bring the murder (and the poisonings) home to anyone. But then the inspector on the case brings in Dr. Fell who has a way of making the most mysterious plain and unraveling the most impossible conundrums.

This is another excellent example of Carr's taking a seemingly impossible situation and giving it enough twists and turns to make it come out right..and quite simply too. As always, the clues are all there and as soon as Fell dangled them under my nose, I was all "of course! I should have seen that." I had a fine time with this installment in Carr's work. 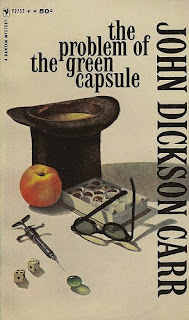