Tuesday Night Bloggers: A Couple of Favorites by Stout 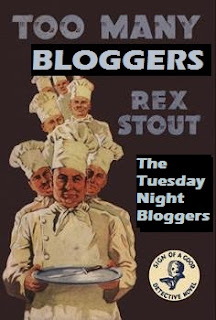 I have been trying desperately to find time (and brain power) to put together a more indepth Rex Stout post for this month's round of The Tuesday Night Bloggers. The TNB is the brain-child of Curtis at The Passing Tramp. It's a weekly gathering of like-minded folk to discuss a mystery author from the Golden Age of Detection. We began our meetings with the Queen of Crime, Agatha Christie and have since worked our way to Stout and his detective duo, Nero Wolfe and Archie Goodwin. January meetings of the TNB Club are being hosted by Noah over at Noah's Archives (and featured by him in our Facebook Group: Golden Age Detection), so feel free to join the party at his place.

With beginning of year happenings at the university where I work, finding a moment to gather my thoughts for in-depth analysis just isn't working. So, instead, I am offering you a peek at the reviews of a couple of my favorite Stout books. 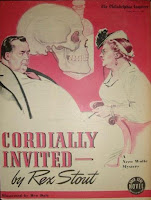 I read Cordially Invited to Meet Death (aka Invitation to Murder; 1942) back in 2011. This mystery was packaged together with Black Orchids because the orchids themselves play a minor role.In this one Nero Wolfe is asked by Bess Huddleston, party-planner for the rich and famous, to find out who is sending anonymous messages aimed at ruining her. Wolfe sends Archie Goodwin to begin the investigation, but before Goodwin can make much headway, the famous hostess is dead from an innocent case of tetanus. Or so it seems. Her brother is adamant that she has been murdered, but it isn't until Inspector Cramer rudely drags the brother away from an invitation to the Wolfe dinner table that our detective becomes involved. Another murderous attempt using the same method is all it takes for Wolfe to have all the facts at his fingertips and once again he hands Cramer the murderer and necessary evidence after a final showdown in Wolfe's office.

I found this second mystery to be much better plotted than Black Orchids. A nifty little murder method and a murderer that I never suspected...at least not seriously. It made for a very pleasant afternoon of reading. Four and a half stars (the highest rating I've given a Stout book so far).

Oh and the orchids? Wolfe sends them as a funeral offering for his deceased client. He doesn't give up those black orchids for just anyone... 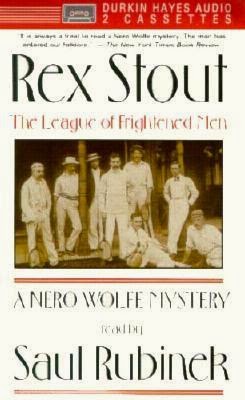 The League of Frightened Gentlemen (1935) is the second of Rex Stout's books featuring the detective duo of Nero Wolfe and Archie Goodwin. Stout's team--made up of the gargantuan genius Wolfe and his street smart legman Goodwin--always provide good entertainment even early in the series.

Here we have a group of frightened men who are certain that their college friend, Paul Chapin, is set on a path of revenge for a crippling injury he suffered at their hands during a hazing incident. Two of their number have already died and each of them received a poetic message following the deaths. Messages in which Chapin seems to be claiming responsibility for the deaths and which tell the group that they should have killed him when they had the chance. A third member of the group, Andrew Hibbard, approaches Nero Wolfe and asks him to keep Chapin from murdering him--but he doesn't want the man turned over to the police. Wolfe tells him that he can't help him under those conditions.

Not too long after, Hibbard disappears and another note is delivered saying that Chapin has killed him as well. Hibbard's niece comes to Wolfe with more information about the league of men, but he also tells her that he can be of no help--abstracting a list of the men involved from her materials before she leaves. His plan is to approach the group and promise to remove any threat from Paul Chapin, discover who (if anybody) really killed the first two men, and prove what happened to Hibbard. Anyone who knows Wolfe knows that he'll fulfill his promise (and collect his huge fee in the bargain).

This is going to be a short review--I listened to this one on my way back home for a family get-together back in 2014. While I enjoy listening to books on tape occasionally (especially on long drives), I find it more difficult to review them. I just sit back and enjoy the show, so to speak, and don't really concentrate on the details. Let me start by saying that Saul Rubinek, who is the reader for this particular version, does an excellent job. I thoroughly enjoyed listening to him and he was excellent in the male parts. Fortunately, there weren't many female speakers--because he had one voice for all of them.

The story itself was a good one--entertaining, finely drawn characters, a nice twist ending, and worth the price of admission just to listen to (or read) the scene where Archie is drugged and then tries to fight his way out of the stupor. Four stars.
********
I am hoping to have that more indepth post ready for next Tuesday. Let's all cross our fingers, shall we?

I love Saul Rubinek. I have never listened to an audio book but I would love to hear that one. There are lots of memorable occurrences in that book, but I have reread it so many times, I don't get any surprises.