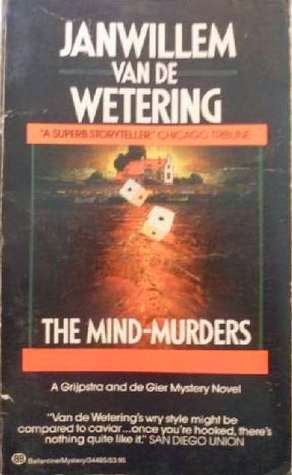 So....I've gone from a mystery with a headless corpse (see previous review) to a book with a headless teddy bear. Named Brom.Yeah, I didn't believe it either. The Mind-Murders (1981) by Janwillem van de Wetering reads like it was written while the author was on an acid trip. It's got hippies, dancing policemen, a couple of cops named Ketchup & Karate (I tell you I'm not making this up), and is written with a dream-like quality that makes you think of the Sixties and sex, drugs & rock-n-roll. The only mind that seems to be murdered is that of the poor reader who valiantly tries to follow the story line to its logical (?) ending. I would quote passages that would prove my point, but I don't want to melt your brain as well. Please pardon me if I seem to mindlessly babble....

The novel is actually two police cases in one. In the first, Adjutant-Detective Henk Grijpstra and Detective-Sergeant Rinus de Gier are drawn into what looks to be a murder without a corpse. It opens with Karate & Ketchup having flung an unruly man with a crutch into the canal in order to "calm him down." De Gier jumps in to help Karate rescue Frits Fortune before he drowns. Later, in the course of explaining the situation to their superiors, K & K happen to mention that Mrs. Fortune has disappeared--taking the entire contents of the house with her including Fortune's beloved poodle Babette. Grijpstra's stupendous detective abilities (of which I have seen no evidence to this point, but heavily implied by the author) immediately make him realize that Mrs. Fortune must be dead and her husband must have killed her and stashed the body somewhere. But where? Aha! says Gripstra. The road crews have been digging up the streets and filling in holes all over the place. Fortune must have dumped the body in one of the holes and the blind bulldozer operator didn't notice the very non-earthlike lump in the hole and just filled it right in so it could be covered with bricks. Obviously the thing to do is to plant a tail on Fortune and every time he twitches near a section of new road we'll have the road crew come back and dig it all up again. Anybody got a guess what we'll find? You got it--a big fat nothing. The police, you, and I will all be very surprised where Mrs. Fortune actually is....
(Oh...and the headless bear? Supposedly, when Fortune was a wee tot he beheaded his teddy bear named Brom and buried him in the garden. Proof positive that he's a murderer.)

And...in what seems to be an intermission we have another lead-back to my previous read....a dwarf! Yes, indeed. Here's the reference (de Gier is explaining why something--can't tell you what, it would be a spoiler--didn't make him suspicious):

I've seen worse in the city, perhaps my mind no longer registers abnormalities. All sorts of apparitions appear these days. There was a dwarf, for instance, dressed in a yellow cape. He rode a scooter, a monkey sat on the handlebars.

There is much banter back and forth between Grijpstra, de Gier and the Commissaris (their otherwise unnamed superior) with the chief observing that his previous boss had claimed "that the police are by definition stupid, because intelligent men will not apply for boring work at low wages. He said that stupidity hardly matters in our profession, provided our brainlessness is compensated by zeal." (Now there's a testimonial for police work....) The Commissaris also tells some pretty pointless stories. [end intermission]

Onward to weird-o case number two, which seems to be a little less psychedelic-feeling: This time round Grijpstra and de Gier become involved with what appears to be a corpse and no murder. And it's de Gier who insists they have a case rather than Grijpstra. An added bonus for their team is Astra, a sexy, young policewoman, who can seduce de Gier and take down a criminal all in the same night.

Despite the pathology report which tells them that Jim Boronski, a man who was found dead, covered in blood, in the trunk of a stolen car, died from natural causes--a bleeding ulcer, de Gier is convinced that there is a murderer somewhere. Their investigation leads them to a sloppy, rude German (who made a brief appearance in the first case) and the possibility of drug-running. But the only evidence of "foul-play" they can find in connection with Boronski is a series of harassing events--the man's car was switched, there was trouble with his laundry, and a missing watch--but as their Commissaris points out, "You can't arrest anybody for harassment." (At least not this kind of harassment in the Netherlands in 1981). They do get to make an arrest and there is a nice sense of symmetry with the first case and it all ends happily with the Commissaris saying: "Everything is all right....Security will be restored."

I was just a teensy bit satisfied with the wrap-up of the second case. That pretty much sums up any good feelings I have about the book. The treatment of Asta (and other women) is VERY sexist--we get an opinion on Every. Single. Woman's. Breasts. Every single one. (All the women in Amsterdam apparently have perfect boobs. Or maybe the men whose point of view we're sharing aren't picky. Or they just love boobs and no matter what they look like, they're perfect.) At first I thought Asta was just along as eye-candy and to identify the entire outfit that one of the women concerned in the case was wearing--but she did get to kick some butt in a nice arrest scene. I'm still not sure whether that was thrown in just so de Gier could be duly impressed and lust after her a little more--after all what's better than perfect breasts? Perfect breasts in action.

The rumor mill on Goodreads tells me that this may not be the most spectacular example of van de Wetering's detective novelist talents. That may be so. But then there are also those who gave the thing four and five stars. I'm not sure that I'm brave enough to try another one. ★  and one-star only.

This fulfills the "Author Never Read Before" square on the Silver Vintage Bingo card and gives me another Bingo. 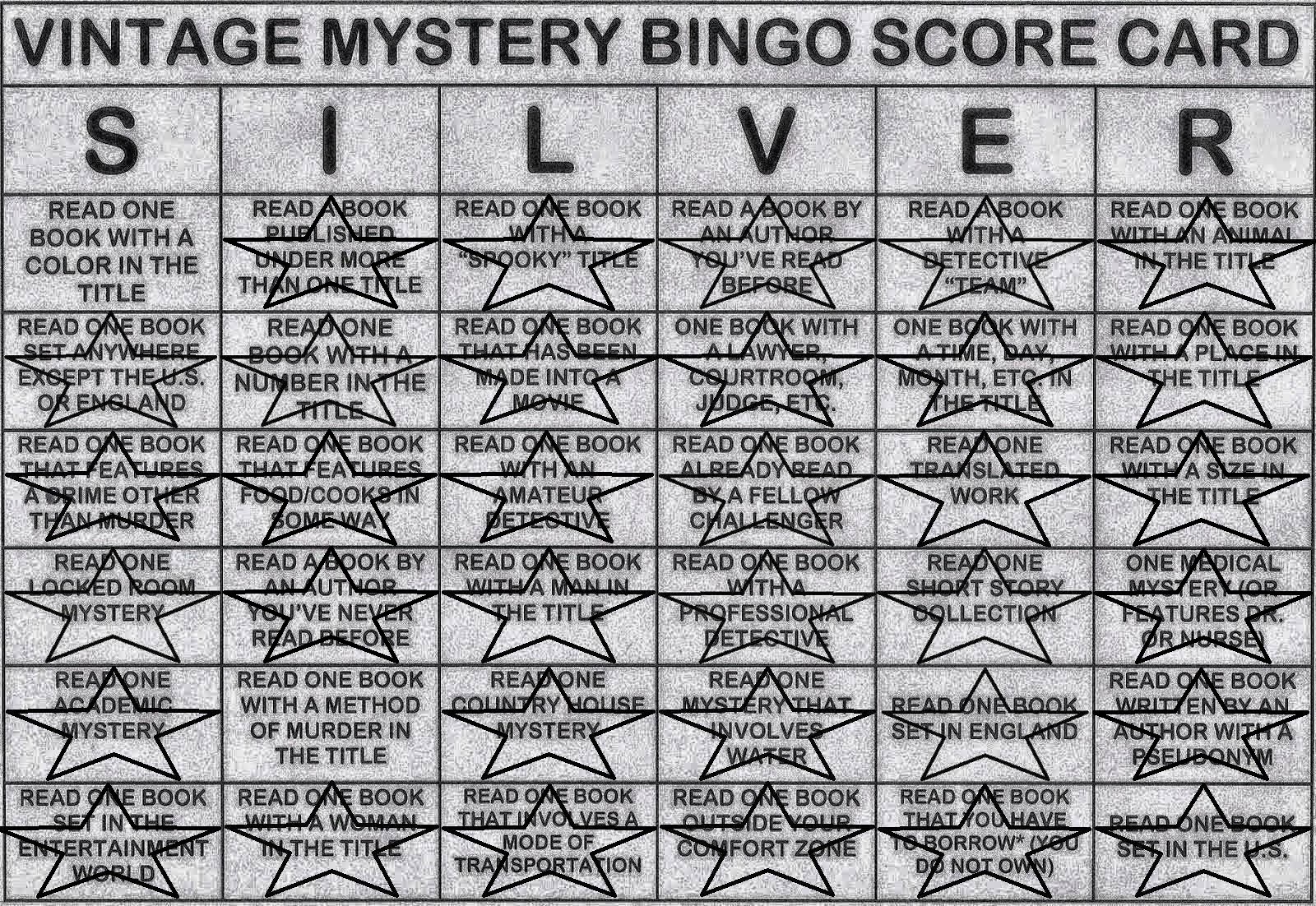 Yeah...I can't say that I recommend it. Or the author based on this outing.

Bev, I think I'll skip this one! I did read The Maine Massacre by him and it was good. I have one other one on the shelf hope it's not this one!! I better go look!

When you said the author was on an acid trip, I had a feeling you wouldn't enjoy it much. I don't think I would either.
Great review!

The first three in the series I thought were pretty good. The first one is especially good, I think, if only for the Zen Buddhist insight. He studied Zen and lived in a monastery when he was a young man. But I sort of gave up on him in his later books. OUTSIDER IN AMSTERDAM, the first book in this police series, is not oddball at all. Very compassionate and almost somber, though it's not without some quirky humor. Something must've happened to him in his later life to become so chauvinistic.

John--I have OUTSIDER IN AMSTERDAM...I was on the fence about reading it after not enjoying THE MIND-MURDERS so much. You've got me thinking I ought to give it a chance.