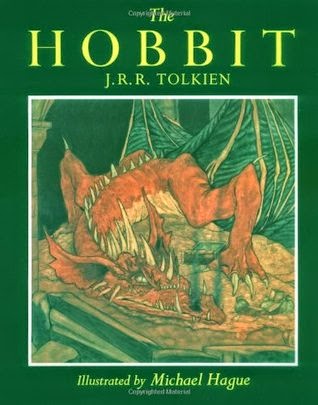 Once upon a time I was forced to read The Hobbit by J. R. R. Tolkien for my junior-year college-bound English class. I hated every minute of it. Which was quite surprising considering that I was heavily into my science fiction and fantasy reading phase at the time. But I suppose there's something about being force-fed books that makes them unpalatable. I totally get what Ms. Troop was doing (now)--and I couldn't have asked for better preparation for college than what she gave us. But there are very few books from my junior and senior English classes that I can honestly look back on without fear and loathing. 1984 by Orwell, Siddhartha by Hesse, and Wuthering Heights by Bronte are pretty much the only ones to escape. Moby Dick? Ick! The Old Man & the Sea? Felt like I was dragged kicking and screaming through the eons we spent on that thin volume. The Hobbit? Just seemed like one long, drawn-out, rambling tale.

So...when one of Megan's Semi-Charmed Reading Challenge categories called for us to read a book read by another challenger and I saw that Kalyn V @ Geez, Louise was tackling Tolkein's classic, I thought it a good time to give this much-beloved book another chance. And what did I think of it this time? Funny you should ask....

Since the movie came out not too long ago and this is such a well-known story, I'm not going to bother to give a full run-down here. Suffice to say that this is a Quest novel with a capital Q. Mild-mannered, home-body hobbit Bilbo Baggins goes on the journey of a lifetime and learns that he's braver than he'd ever suspected and certainly more than adequate for all the adventures in store (just like Gandalf said). So it's also a coming of age novel and all those other high-falutin' English-majorly things we talked about back in college-bound English. There's lots of adventure, sword-fighting with spiders and goblins, and some daring trickery with barrels. A lot to enjoy.

But...it is also one long, drawn-out rambling tale. Tolkien is a story-teller. I'll give him that. But there were quite a few points where my attention was wandering...and most particularly in the last quarter of the book where you'd expect the action and the wrap-up to be at its most riveting. I found myself skimming over whole sections and apparently not missing anything because the story kept making sense.

I will say that I enjoyed myself much more without Ms. Troop constantly at my elbow asking about motifs and metaphors and symbols and meaning. I do wish it hadn't been so long and drawn-out. ★★★ for a nice adventure story. I had hoped to give it more. The edition I read was really quite lovely. I adored the illustrations by Michael Hague.

Labels: 100 Plus, 1001 Books Before You Die, Back to the Classics, How Many Books, Library Books Challenge, Monthly Motif, Outdo Yourself, Read It Again, Semi-Charmed

Y'know, this is a book I know and have always wanted to read. The size is crazy, but it's having seen the film, which I liked, might not live up to each other in the end.
I don't know though.
Great review!

I haven't read this since I was a kid. I wonder what I would think of it as an adult.

I actually read all of THE HOBBIT on my own and wasn't all that entranced with it. I was more entranced by the Hilldebrandt Brothers' illustrations. I attempted to read all of the Lord of the Rings books but abandoned it half way through THE TWO TOWERS. Never made it to the end or to THE RETURN OF THE KING. Tolkien *is* a plodding writer.

If I had a teacher who demanded of me to find motifs and metaphors in any assigned reading I'd hate it too. Nearly every book I was assigned to read I found fascinating from LORD OF THE FLIES to TESS OF THE D'URBERVILLES. Anything by Joseph Conrad, Melville, and parts of THE SCARLET LETTER bored the hell out of me. But the Brontes and Hardy and Dickens I ate up. Oh and Mark Twain, too.

John: I loved Lord of the Flies (but read that on my own). Read Conrad in college and liked him okay. Melville's a big NO. But the Brontes and Twain...totally good with them.