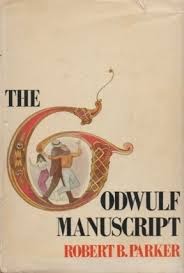 The Godwulf Manuscript (1973) is the debut novel of Robert B. Parker's Spenser series. The book is narrated by our hero and private detective Spenser (no first name). Spenser, who graduated from the school of hard knocks instead of picking up a college sheepskin, is called in by the president of a Boston university (unnamed) to track down a stolen illuminated manuscript--the titular piece. The priceless work of literature is being held ransom by an unknown thief to the tune of $100,000 which must be donated to a free school run by an off-campus group. Despite the opulence of the president's office, he assures Spenser that the university cannot possibly afford to pay the ransom. As Spenser says of the room:

The office of the university president looked like the front parlor of a successful Victorian whorehouse. It was paneled in big squares of dark walnut, with ornately figured maroon drapes at the long windows. There was maroon carpeting and the furniture was black leather with brass studs. The office was nicer than the classrooms; maybe I should have worn a tie.

and the president doesn't seem to be hurting for his share of the ready himself:

The head of campus security suggests that Spenser start with a radical student group called SCACE (Student Committee Against Capitalist Exploitation) and suggests their secretary, Terry Orchard, as a most likely (most willing of the bunch) contact. The detective  talks with Terry, but makes little headway with the suspicious young woman and her boyfriend (and fellow member) Dennis. But later that night, Spenser gets a call from Terry requesting help. Spenser arrives at her apartment to find her in a drugged state and Dennis dead with four gunshot wounds in his chest.  After reviving Terry, he hears a story of two men coming to the apartment having a brief discussion with Dennis and then shooting  him with her gun. The police are ready to accept the obvious--that Terry killed her boyfriend in a lover's quarrel. But Spenser believes Terry and is determined to clear her name and prove that the missing manuscript and Dennis's murder are related.

You all have heard me say before that hard-boiled, private eye novels aren't my usual cup of tea. And I'm also not a huge fan of first person narrative. That would be why I chose this one as my "out of your comfort zone" read for the Silver Vintage Bingo card. Of course, you also probably know that I have a thing for academic mysteries....that would be the small hook that got me to purchase this two years ago. But even knowing that there was an academic slant, I was still wary of the hard-boiled angle.

Fortunately, Parker (at least in this debut novel) does a good job of reeling me in. Spenser is a likeable character, sort of a knight-errant private eye, and I enjoy his voice as the narrator. The descriptions are very much of the hard-boiled school, but the metaphors are not so over-the-top that they make my eyes roll. Apt descriptions and a good feel for the academic world go a very long way towards making this an enjoyable read. Solid story-telling and a decent mystery--although clues are few and far between and there aren't a lot of suspects to choose from--make for a ★★★ and a half star outing.

This, as mentioned, fulfills the "Out of Your Comfort Zone" square on the Silver Vintage Bingo card. And, finally, my first Silver Bingo! "And I'm also not a huge fan of first person narrative."

Really? I have never heard anyone admit to this before. What is it about 1st person that bothers you? It tends to be the most popular way to write a novel. Kind of hard to avoid when reading fiction.

To date this is the only Spenser novel I've ever read. I liked it for the bibliomystery element.

John, I think the biggest thing that has turned me off is so many of the first person narratives I've read recently have been first person present tense (which the Spenser novel is not, thankfully). That comes across as very stilted--as if the narrator is watching her/himself do things and telling about it right at the moment of doing.

Many first person past-tense have the same problem--I feel as if the the narrator is telling the story as if they had watched it happen rather than were the actual participant. If you're going to tell the story in that fashion, then why not use another narrator--whether it is a Watson telling the story or some other narrator. I just seem to prefer the third-person narration.

There are, of course, exceptions. Rebecca is a notable one. There have been others.

Congrats on the silver bingo!
I'm not sure I would get into this one. I'm still stuck on Spenser not having a first name, it bothers me for some reason. Oh well.
Great review still.

I've read and mostly loved all the Spenser books over the years and KNOW that I read this one, but of course I can't remember.

Even if hard-boiled isn't your cup of tea, Bev, I highly recommend these three vintage Spenser books:

P.S. I love first person narration. Bev, Bev, John and I will have to convince you. :)

I'm not a hard boiled fan either. I tried to read some Raymond Chandler and really couldn't get into it all that much. Somebody tried telling me the Perry Mason books were in the same category, and I looked at him like he was crazy. They don't even come close to having that gritty feel to them, at least not to me.

Ryan: The early Perry Mason's are slightly hard-boiled (emphasis on slightly)--but definitely not in the same category as most of the hard-boiled genre.