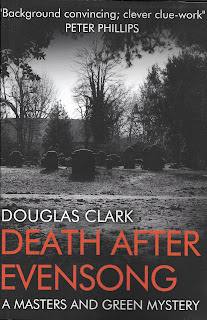 Death After Evensong (1969) by Douglas Clark is the second book in his Masters and Green series. The Yard is called in quickly when the vicar of Rooksby-le-Soken in East Anglia is found shot to death in a locked basement classroom in the old school. In fact, Inspector George Masters is a bit surprised at the quick call and even more surprised when he finds out the body is still in the classroom. But Nicholson, the local Detective Superintendent, explains that he knew he had to when he saw the body. Herbert Parlsoe had been shot at close range and the exit wound proves that the bullet is no longer in the body. But there's no evidence of it anywhere. To all appearances, the man was shot while up against a wall joist, but though there's blood on the joist, there's no bullet hole.

After a search confirms that no bullet can be found and the local Doctor (actually one of two--a father and son who share the practice) confirms Masters' observation that the missile is unusually shaped, the Yard man seems to lose interest in the method of death and starts hunting for motive. And motive there is--in abundance. The vicar was a very unpleasant and Masters and his team cannot find a single soul in the village to put in a good word for him. He was a skinflint and worked every way he could to either pay as little as possible for services rendered or to avoid paying at all. He had had run-ins with everyone from the owner of the local pub and his Italian wife to the doctor and his seemingly surly son to a carpenter he got fired to the schoolmaster he done out of a job at the new school. The vicar even treated his own daughters poorly and Masters wouldn't put it past the darkly beautiful Pamela to go in for a bit of patricide if it would keep dear old dad out of her affairs.

When all is said and done though, it does come back around to how. Because until he and his team can prove how it was done, they will have a difficult time proving who. Masters is sure there was something in the classroom that he saw but didn't understand the first time they were there and a second visit gives him the answer he needs.

I'm a bit torn on this one. The locked room and murder method were quite interesting--I had a glimmering of an idea of how it might have been done, but not the specifics. And, like Masters, once I had an idea about how I narrowed it down to a couple of suspects. I didn't guess right between them--but I was pleased that I spotted it. The characters were all quite good too and I liked the care that Masters took about Parsloe's younger daughter (who is a bit disadvantaged). But--

The antagonism between Masters and Green is really too much (as mentioned in my review of the first novel, Nobody's Perfect). They are definitely getting on my last nerve throughout most of this one and I can state without a doubt that if I had read these in order and didn't know the relationship improves at some point I would have chucked this series after this one. There are a couple of comments at the end that give me hope that number three will be better--but only because I know it will be better eventually. So, this is one series that I can say that I'm really, really glad that the first four books eluded me for so long. ★★★  --all for plot and method.

Douglas Clark was together with Brian Flynn my Great Discovery of 2019, a Golden Age-style writer who wrote classic detective novels disguised as modern police procedurals, with Death After Evensong serving as an introduction. I liked the book a little more than you did on account of the clever magic bullet-trick and using a Dutch enclave as a setting. A top-tier impossible crime novels of the post-GAD period!

TomCat: Just saw this comment--and you do have a very good point. Looking at it from the point of the bullet-trick, maybe I would have liked it more if I'd read it cold. Having already been introduced to the detective team--the personal interactions in this one just really distracted me. Masters and Green have really disappointed me in the first two books of the series.

I do like Douglas Clark overall. He writes clever mysteries with interesting and unusual murder methods. A lot to appreciate in his books.

You're not the only one who prefers the middle-and later books on account of Masters and Green having become friends, but I don't understand why their initial antagonism towards each other is considered a strike against the earlier novels. Doesn't their friendship mean more that you got to see these incompatible personality go from mutual dislike to professional respect and eventually ending up being best buddies? I think it's a sound and very realistic piece of characterization.

TomCat: It might...except Masters shows great consideration for various people in both this story and in the first novel--people he's meeting for the very first time and some of whom are just as unlikable as he thinks Green is. But he can't show the same consideration for a man who's on his team? I think that's what gets to me. That and he and Green have the same quirks in their personalities and ability as detectives in the later books that are apparently such deal-breakers here that Masters wishes the higher-ups would stop giving him Green and Green wants to put in for a transfer. And yet in the later books they've decided these quirks are fine because they have such great respect for each other's abilities.

It's possible that I'd see it more as a growing relationship if I'd started at the beginning. But reading the early stages now, I just really don't like who Masters and Green are at this point. I realize that's a me-thing, but it's what I'm bringing to these early books.

"And yet in the later books they've decided these quirks are fine because they have such great respect for each other's abilities."

But that actually makes kind of sense. The daily routine filed down the sharp edges that allowed them to look pass the personal quirks that annoyed them and come to appreciate what they bring to the table. And don't forget that they're policemen. You'll probably see your annoying colleague in a very different light when you've sat together across a few rapists and stone cold killers.

I think it's a mature piece of characterization to show two incompatible personalities learning how to work together and appreciate each other without having to compromise who they are.