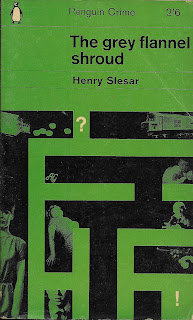 The Grey Flannel Shroud (1959) by Henry Slesar was awarded the Edgar for Best First Novel in 1960. Slesar used his backgrond in advertising to set up a murder mystery set in the advertising world. This gives the agency a very real atmosphere and is one of the highlights of the book. It features Dave Robbins, a young ad man, who finds himself in charge of one of the Hagerty Taits Associates biggest campaigns. When the Burke Baby Food's account manager is sidelined due to a heart attack, Dave gets his big chance. But will the new position be the death of him?

He soon soon discovers a few mysteries surrounding the newest Burke Baby campaign--from the mysterious firing of the photographer assigned to the account to a large, unexplained payment to "A. G." Those connected to the account begin dying and he feels like a target himself after a near fatal subway incident even before he took the account and poison in his nerve medication after the assignment. The clues continue to pile up and they all seem to point towards his boss, Homer Hagerty. His girlfriend, Janey--who is the boss's niece and a darn good ad illustrator--insists it can't be Uncle Homer (insists quite loudly and angrily and often), but if it's not good ol' Uncle Homer, who is it? And why did they have it in for David before he was even assigned to the account?


As far as the whole Edgar award thing goes--I'm just going to tell you up front that I'm not entirely convinced...But then I just stepped aside for a moment to check on the other nominee that year (A Dream of Falling by Mary O. Rank) and I guess of the two, yeah, give it to Slesar. [But seriously were there no other contenders out there in 1959?]

It's not that Shroud is a bad book. It's not. It's got a perfectly decent plot line as far as it goes. The initial set-up around the Burke Baby (for which I read the Gerber Baby) is actually pretty good. But the reveal on the motive isn't. The entire last chapter is a bit of an anti-climax to be quite honest. And the relationship between Dave Robbins and Janey Hagerty doesn't do a whole heck of a lot for me. The blurbs make it seem like she's integral to Robbins figuring out what's going on at the ad agency. but all she seems to be there for (in terms of the mystery) is to argue with Dave every time a bit of evidence comes up that makes her uncle look guilty. ★★ and 3/4--just not quite a three-star effort by my reckoning.

First line: It was his first morning on the Sword's Point railway platform, and Dave Robbins looked about him with interest.
Last line: "Virus," Louise said. "Isn't it terrible how it gets around?" [Much too apt for the times we live in.]

I'm so with you on the Edgar Awards for Best Novel. So many of them in the 1960s and 1950s are hardly mysteries! When it was just an award for the Best *First* Novel they always tended to pick really good ones. Then they invented Best Novel and everything fell apart in the 50s, 60s and 70s. Sometimes these awards are for careers rather than books. Slesar had been a prolific writer of short stories back in the pulp magazine days, mostly f science fiction and adventure. I think this award was akin to sympathy Oscars like those given to Jack Palance, Jessica Tandy, Paul Newman and Geraldine Page in the senior years for pleasant and amusing performances that were barely award-worthy. SO I think Slesar got this Edgar as if the MWA was saying: "Wow, you pulp magazine god! Thanks so much for acknowledging our genre and writing a crime novel. Here's an award in case we never hear from you again." Of course that wasn't true at all. Ten years later he became head writer for the crime-centered TV soap opera The Edge of Night and stayed there for almost twenty years. He got an Emmy for that job in 1983, one year before the show was cancelled! Another award for a career.

John, thanks for this. Yeah--I rarely agree with the award-winners in a lot of these prizes. As I mention--this is an okay read, but definitely not what I'd expect from a "Best of" anything.