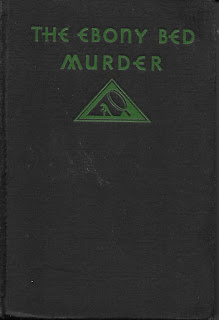 Our narrator, who is apparently a journalist or writer looking to write up murder mysteries for publication, has gone to Griffin Scott's home to get the inside scoop on what really happened in a previous murder (referred to as "the Lopez murder"). Scott, who is an advertising man by day, moonlights as an amateur detective While there, Scott is called upon by D.A. Hutchinson to join him at the site of a new mystery: the death of Helen Brill Kent. And for reasons mysterious to me, Scott takes the narrator along for the ride.

Helen, a beautiful woman, has been known for the way she has gone through five husbands--marrying and discarding them and collecting as much as possible in divorce settlements. She's found shot in her own ebony bed after prematurely leaving a birthday celebration in her honor. Her relatives and the police (in the person of Sergeant Mullens) insist that it's suicide due to neuralgia but Scott immediately recognizes signs that point to murder.

Investigation shows that there are several motives for murder hanging about the Brill Kent premises. She had given the boot to her leech-like father and brothers--cutting them off without anymore handouts. She had also given notice to her "stage-mother" friend and confidante who had helped her build the image that had drawn in monied men like flies to honey. There was also a mysterious man whose voice was heard in Helen's bedroom after she left the party--who was he and what motive might he have had? Scott will have to work quick if he's to prevent the police from following up the wrong clues and arresting the wrong person.

I can't decide what to think of this book. At the beginning I was sure that this thing had originally been written in a foreign language that had a vastly different grammar and word arrangement system from English and then translated by someone who transcribed it word by word with no regard for how it would read/sound. The writing was stiff and ungainly. Word choices jarred--someone please tell me how eyes can "bristle." And when were penguins ever glum and how did we know?

But then we settled down into the story and--though the writing was still not stellar--things picked up. The murder seemed to be ingenious--after all, how did the murderer manage to get their victim to sit there calmly and let them shoot them in the mouth without a struggle or a peep? The amateur was going to hunt the clues and break alibis and generally show the officials how it's done. Except....he didn't. For pages and pages Griffin Scott didn't seem to get anywhere. Or when he did, it didn't matter. And Sergeant Mullens takes the prize for most obnoxious, pig-headed, single-minded policeman that I've had the (a--hem) pleasure of meeting in fiction. Once Scott convinces him that the death couldn't possibly be suicide (and that took some doing, let me tell you) then he latches onto a suspect and absolutely nothing will make him think about anything else. Every single clue Scott picks up either gets twisted to point to the suspect of choice or is simply ignored as if it doesn't exist.

The narrator of the book (the Watson character) is also annoying as all get-out. How many times does Scott have to tell him that he (Scott) doesn't believe that Mullens' favorite suspect (a lovely young lady that our narrator has a soft spot for) is guilty before he'll believe Scott and trust that Scott is working towards the truth--which will, incidentally, clear the lovely lady? I got tired of the narrator-in-shining-armor jumping all over Scott every time he (Scott) asked a question that Mr. Narrator (apparently Gillmore himself) feels makes things look sketchy for the lady.

The best part of the book is Scott's interview with the man who was next on Helen's husband list. Watching him outsmart the man who manipulated both Mullens and Hutchinson into leaving him out of it was a treat. This is when things really started to get good and I have to hand it to Gillmore for a nice plot with an even better ending. I just wish that the first 2/3rds of the book had been better. It's been said that this was written in the style of S.S. Van Dine's Philo Vance novels--but there's far more tough-guy talk going on here than you'll find in a Vance story and Scott is nowhere near the gentlemanly amateur of a Vance. He's a down-to-earth adman who just happens to have a Batman-like cave full of gadgets, gizmos, and chemistry projects. ★★★

Rick @ Reading the Mystery League has also read this title please visit his site for another review of The Ebony Bed Murder.

First Line: On the night of the first shocking tragedy, I pushed the bell to Griffin Scott's duplex apartment.
Last Line: Shah sat up on his lap. He began to make an elaborate toilet for his new home.

If words was bullets, only one man, woman, or child would be alive today. (Sgt. Mullens, p. 43)

When conceit was handed out, you must have been there with a moving van. (D.A. Hutchinson, pp. 62-3)

Most people fondly priding themselves that they're analytical are only suspicious. (Griffin Scott, p. 116)

How does that look to you? It looks like dirty work of the dirtiest kind to me. (Narrator, p 157)

I just can't get over the grand piano suspended by wires from the ceiling to save floor space. I don't think I would want to stand under it. Thanks for the link, and I linked back to yours! Here's to the Mystery League!

I've also seen The Ebony Bed Murder referred to as a novel with all the trimmings of a typical Van Dine School mystery, but your comments on the tough guy talk, Batman-like cave and gadgets makes it sound a lot closer to Baynard Kendrick's Captain Duncan Maclain series.

Another new to me author! It is annoying when a book only gets good at the end. I think it might be worse than a book which is good until the end. Narrators who fear their lady love is going to be arrested and acting like nit wits accordingly, do get on my wick a bit.

Rick: You're right about the piano. And the idea of space-saving was kindof cool (although how high must those ceilings be to have the things high enough not to distract you all the time).

TomCat: Now that you point it out, you're right. It does remind me of Kendrick--though the tough-guy talk actually sounds more like B-grade gangster movies at times (especially the bits from Mullens).

Kate: Yeah--the narrator is pretty annoying and to top it off--he doesn't even get the girl in the end.

Well in fairness Bev I don't blame the girl for opting out of that relationship!

Well--yes, Kate. But normally when the fella is making such a nitwit of himself it at least has a purpose (he's in l-o-v-e and wants to live happily ever after). But here he doesn't even stand a chance with her and all that nitwittedness is just a waste of space.

True Bev! A G Macdonell does something similar between a hero and an anti-heroine in The Factory on the Cliff. Novel from the 20s but quite forward looking. The hero is hilarious in thinking he can save the girl from herself, and his Watson friend is brilliant in just bringing him down to earth like a lead balloon. He also points out that knight errantry palls when you don't get the girl!