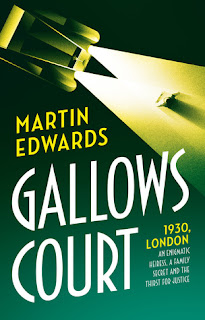 From the book flap:

LONDON, 1930
Sooty, sulphurous, and malign: no woman should be out on a night like this. A spate of violent deaths – the details too foul to print – has horrified the capital and the smog-bound streets are deserted. But Rachel Savernake – the enigmatic daughter of a notorious hanging judge – is no ordinary woman. To Scotland Yard’s embarrassment, she solved the Chorus Girl Murder, and now she’s on the trail of another killer.
Jacob Flint, a young newspaperman temporarily manning The Clarion’s crime desk, is looking for the scoop that will make his name. He’s certain there is more to the Miss Savernake’s amateur sleuthing than meets the eye. He’s not the only one. His predecessor on the crime desk was of a similar mind – not that Mr Betts is ever expected to regain consciousness after that unfortunate accident...
Flint’s pursuit of Rachel Savernake will draw him ever-deeper into a labyrinth of deception and corruption. Murder-by-murder, he’ll be swept ever-closer to its dark heart – to that ancient place of execution, where it all began and where it will finally end: Gallows Court.

Gallows Court (2018) is a bit of a departure for Martin Edwards, though those of us in the GAD (Golden Age of Detection) world shouldn't be surprised. Edwards is the author of two modern mystery series: one featuring Liverpool lawyer Harry Devlin and the other set in the Lake District and featuring DCI Hannah Scarlett and Oxford historian Daniel Kind. But Edwards is also very much a GAD man--serving as eighth President of the Detection Club, an office filled by the likes of G. K. Chesterton, Dorothy L. Sayers, and Agatha Christie. He has also helped bring vintage crime classics back into the public view by introducing British Library Crime Classic reprint editions of various long-forgotten GAD authors, providing a guide to such crime classics in The Story of Classic Crime in 100 Books, and giving us the history of crime fiction between the wars in The Golden Age of Murder. With Gallows Court, Edwards uses his extensive knowledge of the Golden Age period and accepted tropes to create a historical novel that both pays homage to the conventions and atmosphere of the mysteries of the period and turns some of those conventions on their head.

In fact, it wasn't until I started totting up the number of deaths (for the Medical Examiner Reading Challenge) that I realized just how far this had strayed from some of the conventions of GAD mysteries. Generally speaking, the bodies don't tend to pile up in the detective novels of the 1920s and 30s they way they do here--unless you're Agatha Christie and plotting a house party on an isolated island where the guests will die one by one. But Edwards spins such a terrific, twisty tale that I didn't mind that it's a bit more corpse-laden and grisly than my usual GAD fare. The characters are well-done with interesting motives and realistic reactions to the situations they find themselves in. An absorbing and atmospheric historical mystery that kept me reading--I finished it in one day and enjoyed every minute. My only slight quibble is that, as a GAD mystery fan, I had anticipated fair play in the solution. There is an element to the ending that I didn't find to be quite fair. Nevertheless, it was a satisfying ending with a bit of poetic justice delivered to the villain of the piece.  ★★★★★

It sounds good, thanks for sharing your thoughts

Glad you enjoyed this one too, though I don't think it sunk in how many dead bodies there were. I was quite surprised to read there were 18!

Yeah--I don't think it would have sunk in on me if I weren't keeping tabs for one of the challenges I'm participating in.