Books to Die For: Review 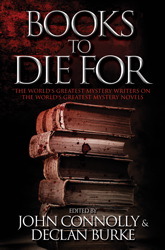 The subtitle for Books to Die For (2012) by John Connolly & Declan Burke is The World's Greatest Mystery Writers on the World's Greatest Mystery Novels. I felt from the first that I wasn't sure that I ought to take the word of a book that claims as "the World's Greatest Mystery Writers" a whole slew of people I've never heard of. Not just haven't read...but haven't actually heard of OR seen their books on shelves when browsing. I do not recognize about 80 out 120ish names. [I may have inadvertently counted some twice--some authors submitted more than one novel.] That's quite a lot. Now, granted, I don't read a lot of modern crime fiction--but some of my blogging friends do and I should have at least seen these names go by--If they really are the "World's Greatest." One of the contributors's work is described as "glamorous thrillers/bonkbusters/chick lit...Tart Noir"....um. Not exactly a recommendation in my book. I didn't want to be snobbish about this, really I didn't. But seriously?

So...I wrote the above as I was starting the book. I've now finished it. And, I must say, this is quite the disappointment for a mystery reader. A large percentage of the books recommended are noir, hard-boiled, spy/espionage, or thrillers. Not true mysteries. Some of the recommenders even say that straight up and they themselves are not authors of true mysteries. Fine. But don't be advertise your book as being recommendations on mystery novels by mystery writers. At best, you might say that it's a book of recommendations on crime novels by crime writers. It was a huge disappointment to see how few true vintage mystery novels were mentioned for years representing the Golden Age--one Christie, one Sayers, one Crispin, one Allingham, and one Tey. That's it. And of the later books just a handful would count as mysteries rather than noir and all the rest.

My final take: most of these seem to be books I'd be just fine with having died without having ever read.....I can't say that I'd recommend it for those of you who consider yourself a mystery lover. But--if noir, hard-boiled, spy/espionage, suspense, and/or thrillers are your thing, then this may just be the reference book for you. ★★
Posted by Bev Hankins at 8:03 PM

Labels: Century of Books, How Many Books, Outdo Yourself, Print Only, Strictly Print, Virtual Mount TBR

Certainly seems like you took a bullet for us all on this one Bev!

Perhaps so--I'm sure (given the reviews) on Goodreads that this has been a helpful reference for some people. But when Christie chosen is Endless Night, I just can't help thinking that this was not the book for me.

Well at least they didn't choose Passenger to Frankfurt!

Coming to this much too late. I'm surprised you weren't around when this book first was published and ALL of us in the vintage mystery blogging community excoriated the book for being a huge misrepresentation and a bad compilation of the "best" of mystery writing. CUrt broke it down and fund that more than 50% of the novels written about appeared between 1990 and the date of publication! I said on someone's blog that this was nothing more than an excuse for a bunch of middling writers to pat each other on the back. Much of the book is a mutual admiration society. Many of the contributors had their books written about by friends. Disgusting. Connolly also talked at Bouchercon in Cleveland about how his contributors all wanted to write about the same writers (15 people wanted to write about Josephine Tey, for example) that many contributors missed their deadlines, that he had to fill in for several contributors or find substitutes for lazy writers who never followed through. Overall, I think it's a travesty and the worst of the books about the "best mysteries" that were flooding the market seven or eight years ago. I remember also writing somewhere in the blogosphere that I hoped Books to Die For would be remaindered very fast.

John--seeing your comment a little late as well. Yeah--I didn't see this go by when it came out. Wish I hadn't noticed it when I did.