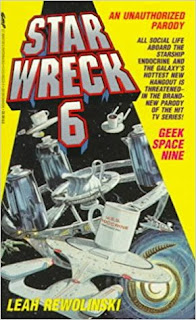 As one might suspect, Star Wreck 6: Geek Space Nine (1994) is the sixth Star Trek parody by Leah Rewolinski. And I think Leah is running out of humorous steam--either that or maybe I just don't find Deep Six Nine (er-- Deep Space Nine) as much fun to parody as other portions of the ST universe. So...maybe my bias is showing. Because Deep Space Nine is not my favorite variation on the Star Trek theme (my apologies to all DSN fans out there).

This time around, an epidemic of boredom has struck Geek Space Nine--the space station's crew and inhabitants couldn't act themselves out of a wet paperbag and their stories are not selling to the Universal Enquirer the way they used to. This means that tourists are avoiding the place like the plague. Starfreak Command who has poured way more money into the pricey dump than they should have cannot let the tourism numbers drop any further and so the crews of both the original USS Endocrine (under Captain Smirk) and the flashy, updated USS Endocrine-D (with Captain Ricardo) are sent to the strategic Gummi-Quardrant station to find a way to plug the tourism drain.

But the troubles aren't over when the starships arrive--in fact they multiply. Because Endocrine crew members start disappearing right and left into the mysterious Talent Void. Commander Dacron risks losing what little personality he has and heads into the Void to bring back the missing officers. Will he be in time? Will they find a way to reverse the effects? Will they then be able help the Geek Space Nine folks get their space station mojo back?

Will anybody care? Oops...got carried away there. But, honestly, the epidemic of boredom was so bad it just oozed right off the page and engulfed this reader. I have really enjoyed the previous installments of ST humor provided by Leah Rewolinski. I just didn't find this one all that funny.  ★

Which almost makes me unwilling to count it for the Humor Reading Challenge. Almost. But, the whole point of reading this parody at this particular time was because I thought it would be funny and it would be perfect for the challenge. And who knows--maybe if you're a DSN fan, you'd find this funny. A whole bunch of people on Goodreads did....

This book continues the Trek fan's dream of having lots of Trek humor that satirizes the beloved characters and concepts. It is clearly not as fresh and funny as the first book, but this time we get to see the original and Next Gen crews each in their own ship and competing with each other rather than trying to share a ship and work together. Fans always wanted to see the two crews square off,and Generations tried to fill that desire, but left most fans dissapointed. Despite the comedy and absurdity, this about as close to that fan desire that we are ever likely to experience, even in comics or novel form. The owners of the franchise are very coy about telling stories like that. In fact, despite the absurdity, the stories do read almost like real Trek stories in much of the text. This time, self-help gurus, rather than dieting culture are the target of satire.
_______________________________
Blokada for pc Newpipe