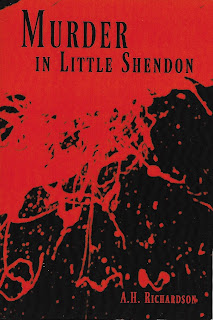 The story begins in The Bygone Era, an antique shop in the village of Little Shendon. The proprietor, Bartholomew Fynche is waiting for someone. His thoughts reveal to us that he has made a discovery (we're not to be told yet what precise discovery) and that his visitor may not be at all pleased with the results of their little meeting. By the end of the first chapter, we know that this is true--because that someone (again, we're not told who) has bashed Mr. Fynche over the head with an Edwardian candlestick and left him quite dead. Fynche's cleaning lady comes into the room some time later and, given her shrieks, soon the whole village knows of the murder.

Inspector Burgess is quickly on the spot and once the doctor, after confirming the method and timing of the death, informs him that rumor has it that Fynche was once connected to MI5, Burgess decides to call in Scotland Yard. Superintendent Milner of the Yard suggests that it would be even better if Sir Victor Hazlitt, a former Intelligence man himself, were to lend a hand and Hazlitt in turn brings along his friend Beresford Brandon, a Shakespearean actor with more than a passing interest in matters of crime. The trio of detectives divide up the work and each takes on the task of interviewing various members of the village. It becomes apparent that nearly everyone in the village was seen in the shop or in the near vicinity around the time of the murder. And...Mr. Fynche was not precisely a well-loved character and just about everyone had a reason (from small to large) to be glad that the man is dead.

Certain villagers seem to have more to hide than others--from the cook who works for Sir Victor's aunt and who seems very worried about something to the gardener who thinks where he was and what he was doing is nobody's business but his own to the young woman who arrived in the village a short time ago and who has an unknown connection to the murdered man to the maid's young beau who manages to lose his jacket in the wrong place at the wrong time. There are also clues to be followed up: a mysterious piece of paper with a "P" and an "O" (or part of an "O"), a squiggle that looks like an "S" or a snake, and something that looks like two sticks; Fynche's missing ring; and a priceless jade horse. Burgess, Hazlitt, and Brandon will have to sift through a great deal of chaff in their interviews before a few illuminating bits of information will put them on the right track.

Murder in Little Shendon (2015) is a classic detective novel in the Golden Age tradition. The village setting in very reminiscent of Agatha Christie, particularly the Miss Marple stories, and the time period is close...some time after World War II. We have a fine mix of the more official detectives--Inspector Burgess of the local force and Sir Victor with his former ties to Intelligence--and the amateur crime solver Brandon. Before Brandon decided to trod the boards, he had given thought to a career as a police detective, so his interest is a bit more than that of the average amateur. The trio make a good team with each detective well-drawn and bringing different strengths to the investigation. Brandon is, as one might expect from an actor, very good at charming the witnesses and getting them to talk.

The mystery plot is, in general, put together very well and so is the investigation. The solution is a little pat, but overall very satisfying and I enjoyed reading a recently published mystery that follows the classic crime tradition so nicely. I understand that Ms. Richardson has followed this novel with two more mysteries featuring Sir Victor and Brandon and I look forward to giving them a try. ★★★★ overall for the story itself.

I have just a few quibbles with the novel--as a book. First--the formatting is annoyingly distracting. It is formatted with double-spacing between every paragraph. Absolutely unnecessary in a novel and it breaks up the page as well as the reading flow. It's as if it was decided ahead of time that we MUST have at least 248 pages using this particular font size and, by golly, if we've got to double-space to get there, then we will. Added to that, the paragraphs are, generally speaking, very short. It's as if the old writing rule that every paragraph should have at least three sentences was taken to mean that you shouldn't have any more than that--the vast majority of the paragraphs have only three sentences and some have less. Between the short paragraphs and the double-spacing throughout, the book feels very choppy. Which is a shame because the mystery itself is very good and a better reading rhythm would have increased the reading the pleasure enormously. The other disappointment is the cover. After going to great lengths to give this novel a very Golden Age atmosphere, that cover is very in-your-face (Look at all that blood!!!) and about as far from a classic mystery cover as you could get. Not that some of the cheap, pulp editions of classic novels couldn't be a bit lurid, but at least the artwork was good and the artists used some imagination. This one looks like someone just dumped a cupful of red paint onto a black piece of paper.

**********************
Thanks to Kelsey at Book Publicity Services for arranging the delivery of this review copy. My review policy is posted on my blog, but just to reiterate....The book was offered to me for impartial review  and I have received no payment of any kind. All comments in this review are entirely my own honest opinion.

A. H. Richardson was born in London England and is the daughter of famous pianist and composer Clive Richardson. She studied drama and acting at the London Academy of Music and Dramatic Art. She was an actress, a musician, a painter and sculptor, and now an Author.

She published her debut novel Jorie and the Magic Stones, a children’s chapter book, in December 2014. At the request of those who loved the first ‘Jorie’ story, Richardson has written a sequel titled Jorie and the Gold Key, and she is currently working on the third book in the series.

A.H. Richardson also enjoys writing murder mysteries and who-dun-its. She is the author of the Hazlitt/Brandon series of murder mystery novels. The series follows a pair of clever, colorful and charismatic sleuths - Sir Victor Hazlitt and Beresford Brandon. The series includes Murder in Little Shendon, Act One, Scene One – Murder, and Murder at Serenity Farm.

A. H. Richardson lives happily in East Tennessee, her adopted state, and has three sons, three grandchildren, and two pugs. She speaks four languages and loves to do voiceovers. She plans on writing many more books and hopes to delight her readers further with her British twist, which all her books have.

To learn more, go to https://ahrichardson.com/

Labels: 52 Books in 52 Weeks, How Many Books, My Kind of Mystery, Review Request