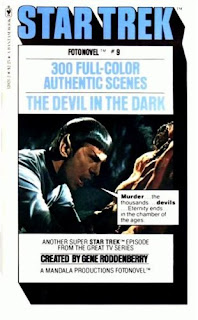 In the 1970s, long before VCRs were a standard thing in most homes, Bantam Books in conjunction with Mandala Productions gave Star Trek fans the chance to relive some of the shows episodes through series of twelve fotonovels. These books were essentially proto-types of the graphic novels so prevalent today that re-tell classic stories and used actual film stills from the show with word  bubbles and explanatory text to accompany the photos. I found my first few in the early days of book-collecting and was finally able to complete the collection in 2012 when my husband and I came across a treasure trove at my now favorite used book store in Illinois. I recently decided to catch up on reading those that I had never gotten to.

The Devil in the Dark (Fotonovel #9) is based on one of the episodes that most clearly emphasizes Star Trek's premise (voiced through the Vulcan philosophy) of "Infinity Diversity in Infinite Combinations." That we shouldn't make judgements based on how someone or something looks and acts--sometimes we need to take the time to understand those who look different and understand their motivations. The Horta, the "devil in the dark," looks like a menacing monster and has, admittedly, killed Federation personnel, but when Captain Kirk and the his officers investigate they find that the Horta had very good reasons to defend her home and her unborn children. Star Trek has always taught us lessons and this is a very important one. ★★★★

The episode  Day of the Dove which is featured in Fotonovel #10 focuses on the militaristic tendencies in both humans and Klingons and it emphasizes the need to overcome those tendencies and work together--especially when facing a common threat. In this case, an energy being that feeds on the negative and bloodthirsty drives that accompany the military mindset. Kirk and Kang, his Klingon counterpart, agree to put aside their differences and refuse to fight just for the pleasure of the creature. As Kang says, "We need no urging to hate humans. But only a fool fights in a burning house."  ★★★★

In The Deadly Years (Fotonovel #11) the Enterprise is on schedule to drop off supplies to a research station on Gamma Hydra IV on their way to deliver Commodore Stocker to his new assignment at Starbase 10. Instead of the young research team, they find two elderly-appearing people and Chekov, when searching for the others, stumbles across an ancient dead body. And whatever has caused the rapid aging afflicts the landing party as well--everyone but Chekov. If they can't figure out why Chekov has been spared, then they all may join the ancient corpse. This episode doesn't have near the deep underlying meaning of most Star Trek episodes. It does take a look at how aging affects ability, but if it had wanted to explore aging in depth, it could have addressed ageism. Still--this is a very interesting story and it's great fun when Chekov is going through all the tests to figure out why he's different. He comes back to the bridge muttering, "Give us another blood sample, Chekov. Give us another skin sample, Chekov. If I live long enough...I'll run out of samples." Sulu replies, "You'll live." "Yes....But I won't enjoy it." ★★★★

Amok Time (Fotonovel #12) is one of the gold standard episodes in Star Trek. It gave fans information about the home world of one of their favorite characters--revealing customs and philosophy of Vulcan life. It marked the first use of the Vulcan salute and salutation "Live Long and Prosper." The story also highlighted the deep friendship and loyalty among Kirk, Spock, and McCoy. When T'Pau, the leader of Spock's family--and, incidentally, all of Vulcan--challenges Spock's inclusion of outworlders in Vulcan ritual, she asks him how he will pledge their behavior. And he responds, "With my life." He is willing to sacrifice just as Kirk has been willing to sacrifice his career in Starfleet by disobeying orders to bring Spock to Vulcan...and ultimately is willing to risk his life in the Vulcan mating challenge (to the death!) to help his friend.  ★★★★★
Posted by Bev Hankins at 3:45 PM

Labels: 100 Plus, Mount TBR, Outdo Yourself

I've never read a Star Trek book, but want to!