The Clock Ticks On: Review 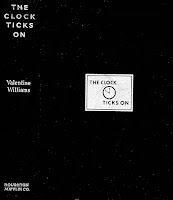 Trevor Dene is Valentine Williams's man from Scotland Yard in The Clock Ticks On (1933). Dene is a young detective who is just certain that his superior officer has made a grave mistake and an innocent man has been sentenced to death in the Oldham Priory Case. The public and the police alike have taken a dim view of the jewel robbers who murdered the butler in cold blood in the process of relieving his employers of their finery and it doesn't help that Gerry Cloan refuses to speak on his own behalf. When a message from an American lawyer comes to the Yard, Chief Inspector Manderton, takes little notice but Dene asks for leave to start off on his own to follow up the mysterious clue.

After a thrilling search through the speakeasies and New York City's under world as well as the stratosphere of New York society that involves beautiful girls and notorious gangsters, he is no nearer to solving the Oldham Priory case and becomes entangled in a new murder--that of his star witness! The clock is ticking...Cloan is due for execution within 72 hours from the moment Dene sets foot in American and he will be hard-pressed to find the proof he needs now that the lawyer is out of the picture.

Valentine Williams had me mighty confused for the first few chapters--and it had nothing to do with the mystifying nature of the story. As mentioned above, his protagonist is a young Scotland Yard man. So, quite British, right? And, not only that, Dene would seem to be an educated policeman of sorts--having been to Cambridge and all. But as he's traveling across the ocean towards the evidence in America, he and his fellow British passengers sound more like they've been raised alongside American gangsters than Cockney cabbies or British aristocrats. 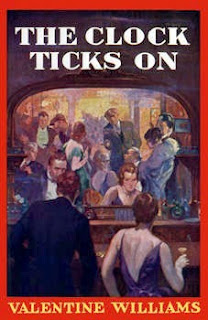 Since I didn't know much about Williams, I took to the internet to see if perhaps he were an American writing about British folks. Not so. Williams was a British journalist. My friend Curtis over at The Passing Tramp does tell me that Williams was very interested in his American audience and mentions in his post (see link) that Williams seems to have set most of his Dene novels in America. Perhaps he was trying to make the books more appealing to an American audience by including more of our slang during the '30s. After the somewhat disconcerting beginning chapters, Dene settles down to a more English demeanor and sound when mixing with the Americans.

The story is a quite exciting one--mixing a bit of good old deduction and clue-finding with a dash of gangster-filled, high-speed chases and the threat of machine-gun toting hitmen. There is also a damsel in distress and the hint of romance for our hero...if the lady is on the up and up and isn't taking him for a ride. Once the story settles down in the States, it is a fun read. Not fair play, but plenty of action and adventure.  ★★★ and a half.

************
This fulfills the "Clock"category in the Vintage Golden Scavenger Hunt. This is also my first entry in Rich's February 2016 Crimes of Century feature. Got any 1933 mysteries on tap this month? Come join us!

Oh, this sounds lots of fun. I must look out for a copy, or for any of Williams's other Trevor Dene novels.

I like the old-school gangster theme. That appeals to me greatly.