Opting for a little more perilous viewing--this time with Rod Serling's Night Gallery Season One.  First up, the pilot episode featuring: "The Cemetary," "Eyes," and "The Escape Route."  "The Cemetary" stars George Macready, Roddy McDowell, and Ossie Davis in a tale about greed and revenge.  McDowell is the black sheep nephew who has shown up just in time to inherit his uncle's fortune...if he can stay alive.  Ossie Davis plays the faithful butler of 30 years who is finally going to get his due...one way or another.

In "Eyes" Joan Crawford plays a selfish, heartless rich woman who has been blind since birth.  Determined to see--if only for the few hours promised by a new technique, she blackmails her doctor and her lawyer into finding a suitable donor to give her what she wants.  But all the money in the world can't guarantee that all will go as planned. 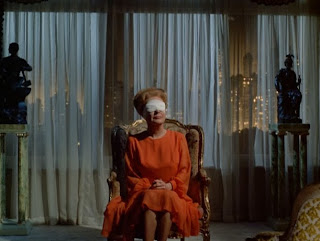 And, finally, in "The Escape Route" a Nazi war criminal played by Richard Kiley is hiding out in South America--haunted by demons of the past. All he wants is a little peace and to be able to survive. When he chances to go into a museum, he notices a painting of a fisherman that represents his dreams of escape.  A Jewish survivor of the Holocaust (Sam Jaffe) who has been looking at a very different painting also notices him while in the museum...forcing him to make an escape of a different kind.

These three stories made for some mighty fine viewing on a rainy afternoon.  The last is a bit drawn out (how many times does he really need to go stare at the painting?)...but a nice set of stories to kick off the Night Gallery show.

Just re-watched this myself Bev and I agree, it's a great collection of stories - not qute on par with TWILIGHT ZONE at its best but better than say the final season of that venerable show - and all three are different enough to make the anthology feel worthwhile and varied but with a decent enough thematic link to feel they do belong together.

I have to say that my favorite is the one with Roddy McDowell. He makes for such a slimy, ne'er-do-well nephew. :-)

I agree, Bev. Roddy McDowall did unctuous parts so well. That segment of the the pilot is really rather good. From Mordred in CAMELOT on Broadway to this role in NIGHT GALLERY to another slimeball in THE THIRD DAY (an amnesia crime movie w/ George Peppard and Elizabeth Ashley) he was a great bad guy. And he did several oily villains on TV crime show guest spots, too. I remember one on "Barnaby Jones" in particular where he was pretty damn good.

So glad to have you back commenting, John! Yes, I can remember McDowell in some of those TV crime shows in the late 70s/early 80s. I always enjoyed his acting.