No Patent on Murder: Review 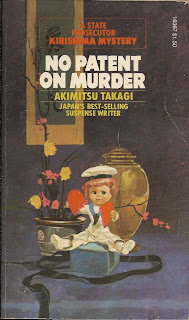 No Patent on Murder (1965; aka Honeymoon to Nowhere) by Akimitsu Takagi

Summary provided by Dick Adler on Amazon.de: Etsuko Ogata is engaged to be married to a university lecturer, bur her father, suspicious of the groom's past, hires a private investigator. The PI uncovers a link to a notorious war criminal. The bride's father, a former prosecutor, also finds a younger brother with possible criminal connections who died in a suspicious fire. "One black sheep is bad enough, but he has two in his family," he tells his daughter. "One can't help thinking there must be an ominous streak in him too..."

But the young woman is 28 and just getting over an infatuation with a man who married one of her friends. Inevitably she goes against her parents' wishes and marries Yoshihiro Tsukamoto--despite noticing other kinds of strange behavior in him. On the night of their wedding, just before they are to leave on their honeymoon on the super-express train to Kyoto, Yoshihiro gets a call which he says is from a university official, demanding his immediate presence on campus. He leaves the hotel and never returns; his strangled body is found later that night.

The prosecutor put in charge of the case is a rising star named Saburo Kirishima--the same man Etsuko pined for before he married her friend Kyoko. His investigation focuses on the person who called the groom at his hotel. Was it the bride's father? Or a young colleague in his law office who wanted to marry Etsuko himself? Or could it have been someone connected with the groom's family? As the meticulous details pile up, we learn as much about middle-class Japanese life in the 1960s as we would from any nonfiction book....

*****************
My Take:
Periodically, I decide to give a Japanese mystery a try. Almost always because it will suit a challenge that I'm doing. And almost every time I am reminded that the pacing of Japanese writing just doesn't suit me. The build-up to the crime is sooooooooo slow. Providing background is one thing, but the Japanese style of narration seems to require (as noted in the summary) meticulous (I would almost say tedious) attention to detail. Where British or American mystery authors of the period would tend to summarize characters in short passages, Takagi takes several chapters to slowly provide details on Etsuko and her family, Yoshihiro, and all the supporting characters.

I do enjoy learning about other cultures and those cultures during different time periods, but I find it difficult to adapt to the narrative style. The only exception to this rule so far has been The Decagon House Murders by Yukito Ayatsuji--most likely because it pays homage to the classic mysteries of the Golden Age. The story did pick up once the murder had occurred and Kirishima and his assistant Kitahara begin their investigation. I did enjoy following Kirishima's process of detection and interrogation. ★★ and 1/2.

I was wondering why you had to go to the German amazon site to find info about this book. It's been in print for years from Soho Press but under a different title: HONEYMOON TO NOWHERE. Obviously you didn't know that. Check out the blurb and you'll see -- exactly the same characters and plot. I've only read THE TATTOO MURDER CASE by Takagi and it was an overly complicated plot for my tastes, dizzying trying to keep it all straight. Never tried any other Takagi books, but only three are translated into English. Not much choice for us anyway.

I suggest you give Shizuko Natsuki a try. MURDER ON MT FUJI is a traditional country house style mystery but with a Japanese flavor. I think her crime novels are superior to her "honkaku" style mysteries. THE THIRD LADY is one of the best Japanese mystery novels I've ever read. But it's pure suspense, all about character and emotion and Japanese morality/traditional mores; more of a psychological thriller. You might be interested in THE TOKYO ZODIAC MURDERS by Soji Shimada but it's rather gruesome because it deals with dismemberment murders. An amazing plot and a totally insane solution if you can bear with the grisly details.

Actually, John, I did see that it had been published under the other title and then managed to ignore it (I'm blaming that on my over-worked brain and other things...life's a bit complicated at the moment...).

Thanks for the suggestions. I'll have to give The Third Lady a try. I'd really like to expand my mystery reading a bit beyond the usual British and American sources.