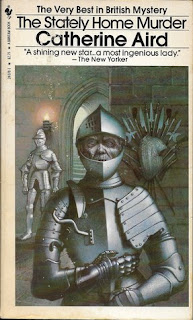 “There’ll have been a reason,” murmured Sloan.


That was one thing experience had taught him.  There was a reason behind most human actions.  Not necessarily sound, of course, but a reason all the same. (47)


Third in Catherine Aird's series starring Inspector C. D. Sloan, The Stately Home Murder (aka The True Steel;1969) was the first of her police procedurals that I ever read. Like many of those early mystery discoveries, I brought this one home from my public library. I'm sure I discovered her name in the back of some other book or the title just leapt off the shelf at me...because, of course, there was no internet or book-blogging world available to this preteen back in the dark ages of the late 70s and early 80s. At that time, I was simply looking for a good mystery to feed my crime fiction habit and I don't remember noticing the humor so much. But Inspector Sloan has a dry, subtle wit that definitely appeals to me now.

The stately home of the title is one Ornum House. Due to ghastly taxes, the current Earl of Ornum has been forced to open the house to the public every Wednesday, Saturday, and Sunday as well as Bank Holidays (except Good Friday--the Earl draws the line there: "Religious holiday. Not a civil one. No beanfests in my house on Good Friday."). On this particular Sunday in June, the usual crowd of folks on holiday and the curious have come to Ornum House...some with children in tow. Mrs. Pearl Fisher had had what seemed at the time the good idea to take her children on an outing. She should have known that Michael wouldn't be able to stay out of trouble. Of course, she would never have expected him to discover a dead body in a suit of armor, but, then, neither did their guide.

The body belongs to Osbourne Meredith, who has been working in the library and muniments (documents) room--sorting out the history of the Ornum estate and earldom. When Sloane and his dubiously helpful constable arrive, the discover that Meredith had made some interesting discoveries among the papers, some of which may affect the noble lineage. Did someone kill to keep the status quo? Or did Meredith make an even more dangerous discovery?

Aird has given us a mystery novel that is firmly rooted in the vintage works of the Golden Age. Though her book is set in the late 1960s, the detective work could have been done by Inspector Alleyn in 30s. The style of investigation is very much of an earlier era and she has made a definite effort display her clues in a nod to the "fair play" school. That alone makes this an excellent novel, but she also entertains us by making fun of the very tropes she emulates. She plays on standard motifs and plot devices and serves up a denouement that should make classic crime buffs howl in dismay--but, it fits with the atmosphere she has skillfully employed. ★★★★★ then and ★★★★★ now. [I love it when I still enjoy books that I loved when I was younger.]

It was perhaps well that Dyson had gone in for photography.  Knowing all the answers as he did would have got him nowhere on the police ladder of promotion. (53)


“A ghost?” Sloan sighed. There would have to be a ghost, he supposed, in a house like this, but Superintendent Leyes wouldn’t like it all the same.  (72)


IS: You thought he was crying wolf.


VA: I think [very fairly] that we all tend to exaggerate what is important to us and to diminish what others regard as important.

“People have always been divided into two groups, Constable, and the sooner you get that into your head, the better.” At school he had learnt about patricians and plebians, as a young man about proletarians and…proletarians and…Sloan couldn’t think now who the others had been, but he could still remember getting very excited about it at the time. It had seemed so important. Now that he was older he knew the grouping was simpler than that.

“Brains,” pronounced his lordship oracularly, “are all very well in their way. That right, Cossington?”


Mr. Adrian Cossington was far too clever to admit to having any at all and merely murmured, “A point of view, my lord, a point of view.” (139)