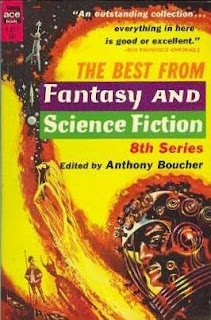 The Best from Fantasy & Science Fiction 8th Series (1959) edited by Anthony Boucher really isn't. The Best, that is. Or if these stories are, then I'm afraid science fiction and fantasy had a pretty off year in 1959. Stories that were supposed to be funny, weren't (Ron Goulart and "A New Lo," I'm looking at you). Stories that were supposed to be fantasy didn't seem to have any fantasy elements (Shirley Jackson and "The Omen," I'm looking at you). And it's not as if every story that didn't meet the expectation provided by the brief introductions were positively bad stories...but if you're told something's going to be humorous, you kind of expect to at least chuckle a bit even if the humor isn't your particular brand. Or you expect fantasy elements when you've been told straight up that the story before you is a "wholly delightful fantasy." So--if these stories are supposed to be the best representatives of particular styles of fantasy and science fiction, then they don't fulfill their objective.

And, unfortunately, most of those stories that do fall under the fantasy and science fiction umbrella manage to fall a little flat as well. I expected more from authors such as Poul Anderson, C.S. Lewis, Isaac Asimov, and Brian Aldiss. The best of the bunch is a story from an author I'd never read before: "Captivity" by Zenna Henderson. This is one of several stories about "The People," an alien race whose members were forced to flee their dying planet and some of whom landed on Earth where they must try to keep their presence secret. Due to circumstances not explained in this story, those who came to Earth were separated and so there is some contact with humans as they try to find others of their kind. This particular story focuses on one young alien who is known as "the Franchers kid." He's never fit in and no one takes an interest in him until a woman whose health has prevented her from teaching full-time volunteers to work with him privately. She soon discovers his uncanny and unearthly musical abilities and eventually helps him find his people. This is a touching story that is ultimately about accepting differences and understanding that different doesn't have to mean dangerous.

The Shirley Jackson story is actually a sweet little story about the effects of coincidence, but (as I mention above) I was disappointed when I found no elements of fantasy (or science fiction) at all. As a straight work of fiction it is particularly good, but it fails to meet the standard of the collection's purpose. Overall, one of the more disappointing SF and/or Fantasy collections I have read. ★★
Posted by Bev Hankins at 12:35 PM

Ron Goulart is terrible. What Lewis story was it?

I've read some Goulart that I enjoyed (long ago and far away--pre-blogging). The Lewis story was "Ministering Angels."

Ron Goulart can be brilliant, and is usually very good indeed.

F&SF at times, particularly for favored writers such as Jackson, would and still does publish stories that were no fantasy nor sf...it the editors think there's enough interest among the readership to do so. The other durable fantasy magazine founded in the decade, FANTASTIC, did so as well from time to time. F&SF is still publishing, FANTASTIC ran from 1952-1980, though the title was revived later, and recently closed up shop as a webzine. Jackson's most famous story in F&SF, "One Ordinary Day, With Peanuts" is also not fantasticated at all, but charming, and her kids named the collection of her previously unreprinted stories for it (JUST AN ORDINARY DAY).

Zenna Henderson was one of the most popular of the F&SF "discoveries"...there was even a tv movie based on her People stories.

I've never read this particular volume of the BEST FROM series, but I suspect if you dip into others you'll find more to engage you.