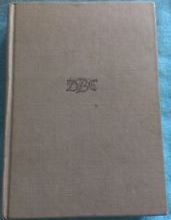 The Blank Wall (1947) by Elisabeth Sanxay Holding is the first novel in a three-in-one Detective Book Club edition. I simply could not finish this novel. I have read a few of Holding's previous works and, while I did finish those, I really didn't enjoy her style. I'm not a big fan of psychological suspense and common life dramatic suspense and she really overdoes it, in my opinion. In this one we have this middle-aged woman who is agonizing over her daughter's friendship with an unsuitable man. And agonizing and agonizing. Then she gets mixed up with an unsuitable man....and I assume all sorts of unsuitable things happen, including murder since this is a crime novel after all, but I really don't know because I stopped reading. Holding just didn't make me care about her characters and what was happening with them.

But--since I don't plan on returning to this book in the future, I am shoving it off of Mount TBR and counting it towards my climb.
Posted by Bev Hankins at 10:05 PM

So sorry you really didn't go for this (in some ways it is her best known single work, not least as it was filmed not once but twice), but fair enough, if suspense int he Highsmith mould is not your thing, then this is not the book for you is it? Better luck next time Bev :)

Sounds like you wanted to literally throw it off the mountain, Bev. I have a combo book containing Blank Wall and Innocent Mrs. Duff. Sounds a little "Ruth-Rendellish" to me, whom I struggle to get through. You have almost convinced me to dump this unread as I generally agree with your opinions. I have way too many books to read and fewer years left to do it.

Sergio: I thoroughly enjoyed the Highsmith short story collection I read (I haven't read any of her longer works)--so I don't know. Holding just does not appeal to me. I'm not entirely sure why. I do know that this time her female protagonist was driving me crazy before I got half-way through the book. I just couldn't sympathize with her motivations at all. Which doesn't mean I have to like a character--there have been thoroughly unlikeable characters for whom I felt some understanding of why they were behaving as they did. But I did not understand her motivation at all.

Jacqueline: Hmmm. I like Rendell--quite a lot, although I tend to like her Wexford series more than the stand-alone suspense novels. I appreciated the suspense more when I was younger. I remember really liking A Judgement in Stone when I as in my late teens/early twenties, but when I tried to re-read it recently I just couldn't get into it again.

I've only read a few of her books but not this one. I've seen the movie retitled THE RESTLESS MOMENT with Joan Bennett and James Mason and it's very well done. The story is of the accidental death of the cad the daughter is involved with. The mother thinks her daughter killed him, so she stages a drowning and goes to great lengths to protect the daughter from being arrested. Then someone tries to implicate the mother as the killer. Maybe an example of the movie being much better than the book.