Christie Firsts: Where to Start? 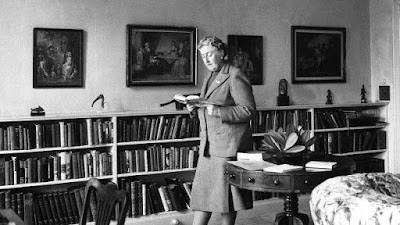 Kate over at  Cross Examining Crime has decided to mark Dame Agatha Christie's 126th birthday with a list of suggestions for first-time Christie readers. She has also issued a challenge to her fellow bloggers to do the same. The challenge in full? To go out on a limb and suggest the best novels to introduce readers to Hercule Poirot, Miss Jane Marple, Tommy & Tuppence Beresford, and Superintendent Battle, as well as the best introduction to Christie's stand-alone novels and thrillers. She would love to know which novels you would recommend and if you are twitter adept (which, like Kate, does not include me) the hastag is #ChristieFirsts

I'm going to offer up two suggestions. First is "Christie the Bev Way"--as near as I can recall this will be the route to a life-long Christie (and mystery) addiction using the books that first introduced me to these various characters and types of books. Except for Jane Marple. I do not suggest that anybody get their first taste of Miss Marple via At Bertram's Hotel (explanation to follow)  and I will suggest the second book that I read with our favorite spinster.

1. Hercule Poirot: My first introduction to the great detective with the egg-shaped head and the fabulous moustaches was when I bought a two-book set of Christie novels at our elementary school's book fair. Up till then, my mystery diet had pretty much consisted of Nancy Drew and I had never hear of Agatha Christie before--but the synopses really grabbed me...especially Murder on the Orient Express. I was so glad that this baffling murder with all those interesting suspects and the exotic train stuck in the snowbank was my first taste of Christie. I loved the interviews with the passengers and the finding of the clues--both real and false. I was hooked. 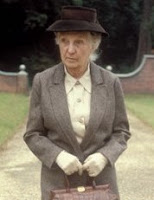 2. Miss Jane Marple: Now, it was a very good thing that At Bertram's Hotel wasn't the very first book that I read. As an elementary school child, I just did not get it at all. And my dim memory of reading it was that I was really hazy on what the real crime was about. All that feeling of nostalgia went right over my head. Fortunately, since I had already read MotOE, I knew that Christie could do much better. And she proved it when I read the next Miss Marple book to come my way: A Murder Is Announced. This was much better--small village atmosphere, a room full of suspects, and Miss Marple noticing all things that the police missed. I have always been impressed with the twist--even all these years later when I already know who did it. 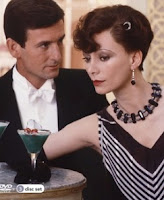 3. Tommy & Tuppence Beresford: Despite there being fewer of these, I've always had a soft spot for these two adventurers. It all began with Partners in Crime, the short story collection. These stories where Tommy & Tuppence take over a detective agency and proceed to solve mysteries in the style of (or at least with reference to) various great detectives delighted me.

4. Superintendent Battle: My first introduction to the good superintendent was in Murder Is Easy. But this is more of a cameo appearance and shouldn't really count. My first real experience with Battle was in The Seven Dials Mystery and I was fascinated with him, "Bundle" Brent, and the secret society involved in the mystery.

5. Stand Alone: The first book I read without one of Christie's regularly featured detectives was Ten Little Indians--my library still had an edition with that title rather than And Then There Were None. That book knocked me for a loop. It was actually the first book I read by Christie that didn't feature either Poirot or Miss Marple. I was just a youngster, so I had no idea she had done so many different things. So, that threw me off-stride. And then....when I got to the end and THAT solution. Wow. If I hadn't already been sold on Christie, that book would have done it. And I have introduced several friends who had never read a Christie book before to the author's works using this very book. It hasn't failed to reel them in yet. So--when I'm suggesting just one book to never-read-Christie before folks, this is THE book.

6. Thriller: They Came to Baghdad was the first. I have to admit, thrillers and espionage novels have never been a big draw for me, but Christie does tend to have fairly engaging heroines which help. I'm not over the moon on this one, but, as I point out, this path did keep me headed on the detective-genre journey that Nancy Drew started on.

And that's it....Wait a minute! What about Colonel Race? My first experience with him was Death on the Nile and that's a book that I certainly would recommend highly to any first-time Christie readers. Exotic locale, closed-setting, interesting wrap-up--it's all there. I really like Colonel Race here helping out Poirot--and wish he'd appeared more often. Of course, it's possible I'm also heavily influenced by the fact that David Niven played him in the 1978 film (I adore David Niven).

My alternate suggestion for those detectives who appear more than once? Start with the earliest appearance of each. Whenever possible I do like to read series characters/stories in order. It's nice to see how characters might change over the course of the series. Not that Christie's detectives change a great deal, but I do think there are slight changes over time. One of these days I plan on rereading all of Christie in the order of publication. When I have time for an intense reread....

So many similarities to my own experience and preferences, Bev! I KNEW you were a brilliant colleague! :)

Interesting choices! A Murder is Announced definitely seems to be another popular choice, as does Partners in Crime. Great seeing which Christie's you first read. Not sure I can remember which were my first ones.

Nice choices, I'd be happy with them. I picked Murder is Announced too, and almost chose Seven Dials

I like this approach you took, Bev. I'll join you with my actual first Christie reads.

Poirot - Murder on the Orient Express
Marple - The Body in the Library
Beresfords - The Secret Adversary
Supt. Battle - The Seven Dials Mystery
Col. Race - Cards on the Table
Stand alone - Murder at Hazelmoor (aka The Sittiford Mystery)
Thriller - The Man in the Brown Suit
Story Collection - Hmmm... It was either Parker Pyne, Detective or The Mysterious Mr. Quin. Maybe it was The Regatta Mystery (and other stories). Not too sure about that one.

I don't think any of those were clunkers except for parts of The Secret Adversary which I remember boring me as a high school teen. My high school friend Paul and I tore through the entire works of Agatha Christie over a two year period. Paul read them all and I sort of got sidetracked and began reading other writers just as voraciously. And I never stopped. But I never really finished reading all of Agatha because Paul warned me that some were so awful that I should spare myself the misery of reading them. To this day I still haven't read Passenger to Frankfurt, Elephants Can Remember, Destination Unknown, and the infamous Postern of Fate which Paul referred to as Postern of...something else. HA!

First standalone (and first Christie EVER!): And Then There Were None (although I read it as Ten Little Indians. My copy was published to accompany the 1966 film.)
First Poirot (and my SECOND Christie ever): Murder on the Orient Express
First short story collection (and my THIRD Christie ever): The Mousetrap and other stories.

Here's where it gets more vague:

First Miss Marple: I'm almost positive it was A Caribbean Mystery.
First Tommy and Tuppence: It must have been The Secret Adversary, which I liked much more the first time I read it than any time since.
First Superintendent Battle AND First Colonel Race: Cards on the Table.
First thriller: Gosh, I don't really remember. I believe it was Destination Unknown (which I read as So Many Steps to Death).

John & Brad: Thanks for sharing your actual Christie firsts. I have to say--I'm one of the few people who actually like Destination Unknown. But I'm not a big fan of standard thrillers, so I think I just like what Christie does with the usual tropes. Elephants Can Remember is pretty bad--although I did enjoy the production with David Suchet. A whole (connected) subplot was added that fills out the story in a very nice way. David Suchet and Zoe Wannamaker are excellent as Poirot and Mrs. Oliver. It was nice that they were able to take a sub-par book and make it into a pleasurable viewing experience.