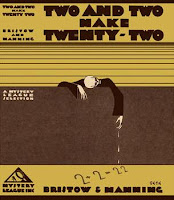 Two & Two Make Twenty-Two (1932) by Gwen Bristow and Bruce Manning takes us to Paradise Island off the coast of Louisiana in the beautiful Gulf of Mexico. A cozy island get-away for the rich and elite, Paradise Island and its exclusive Peacock Club makes every wish come true for those who can afford its delights. Brett Allison, the mysterious owner, provides entertainment in the form of sports and gaming tables, enough to keep even the most demanding guests occupied. Or so you would think.

But somebody on Paradise Island has time enough to indulge in a little diamond-smuggling here and a little drug-running there with enough left over for the a spot of murder. The guests are shocked to find themselves in the midst of a real-life game of Clue and the murderer is someone sharing the island with them as a brutal storm keeps them all captive.

For quite some time Federal authorities have known that drugs were being smuggled into the country via the Gulf of Mexico. But just when they get close to finding the source and the point of entry, their agents have a way of dying--through the most innocent-seeming ways possible. Most recently, an agent on the way with what was to be "absolute proof" went down in his plane, taking the proof with him. No evidence of tampering, just a fluke accident. Or so it would seem.

Major Jack Raymond and Andrew Dillingham aren't so sure and when they are sent to Paradise Island to investigate whether that lovely playground of the rich is the entry-point for the smugglers they discover indications that a woman may be involved...and may have had a hand in the agents' deaths. Another agent, Linton Barclay, meets them there and directs their attention to the beautiful Eva Shale. Eva has wealth from an unknown source and skillfully runs her own boat all over the Gulf. Unfortunately for Andrew, who has fallen for Eva, there seems to be good cause for suspicion.

But there is also reason to suspect their genial, though rarely seen host. Brett Allison also has made his wealth through mysterious means and little is known about the Island's owner. Is it possible that the money comes from the drug game? Circumstantial evidence piles up....and just as the three are preparing to spring a trap to catch the drug runners, Linton Barclay is murdered in his cottage and the last person known to be with him was Eva.

Allison contacts the mainland police and is put in charge until the storm will allow the officials to reach the island. A night of questions and alibis, confessions and surprises will reveal that more than one person on the island may have wanted Barclay dead. There is the jealous husband, Tracy Cupping, who thought his (much younger) wife Imogen was spending too much time with the handsome Barclay. There is Judith Garon who initially held Barclay's attention until Imogen and then Eva came along. There is Foster the man who wants to buy Paradise Island and who had rivals in the business. And then there is Mrs. Penn, the club housekeeper, who visited Barclay's cottage that night on an undisclosed errand as well.

Plenty of strange goings-on to confuse the issue. Allison would like to clear the matter up before the authorities arrive--but Barclay's thuggish boat crew make things difficult when drugs and diamonds are finally discovered and someone bashes the island's radio operator over the head and wrecks the radio set to prevent further communication with the outside world. Fortunately, the good guys have a secret weapon--Daisy Dillingham, Andrew's grandmother and daughter of the late Judge Dillingham. She may be to quote one of her fellow club residents "two years older than Adam" but her wits are sharp and she's on the ball when it comes to noticing vital clues. Daisy is fully capable of outwitting a murderer and handing Major Raymond a drug runner on a platter. 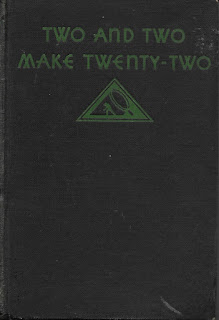 For the record...Daisy Dillingham makes this book. Bristow and Manning give us an islandful of well-drawn characters, but Daisy is the star of this show. And not just because she's the amateur sleuth who gets to the bottom of everything. She's sprightly and spunky and not willing to take anything from any of these people. She's lived long enough to do as she pleases and she has the social clout to get away with it. She's exactly the kind of feisty grandma we all want on our side.

Oh, and the mystery is pretty good too. It may sound like it's a grubby little drug-ring caper, but the murder in the cottage makes it a good old-fashioned clue and time-table driven mystery. Armchair detectives have a fair chance to put the clues together themselves. I managed to figure out the how, but Bristow and Manning did a good job keeping me from figuring out the who. If you have the chance to get hold of a copy of this one, I'd be interested to know if you put it all together.  ★★★★ for a very nifty Golden Age mystery.


Gwen Bristow and Bruce Manning were a married couple who wrote many books and screenplays separately and co-authored four mystery novels together (The Invisibile Host [aka The Ninth Guest], 1930; The Gutenberg Murders, 1931; The Mardi Gras Murders, 1932; and this one). Bruce Manning was born on July 15, 1902 and gives me another July author to add to the Birthday Month Challenge.

My copy = no dust jacket

This  fulfills the "Number in Title" square on the Golden Vintage Bingo card as well as completing two more Bingos. 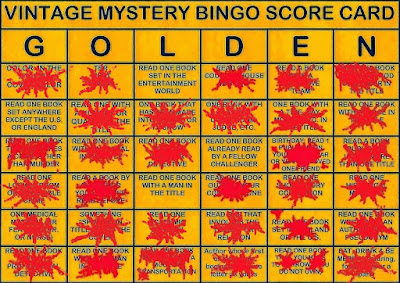 Intriguing little story here. I always wondered what this one was about. I have all the Mystery League books by this husband and wife team but have only read THE INVISIBLE HOST. I think all of them except HOST are set in Louisiana.

Curses! You have only four books left and will probably finish the Golden Age card before me. Nicely done! I have six more to knock off but I won't be able to get to them until September.

I loved Gwen Bristow books. I will look for her collaborations with her husband. Thanks

I am surprised by this book when I see what year it was written in. It seems ahead of its' time, but in a good way.
Great review!

Sounds good, Bev. I'm lately in the mood for these sorts of mysteries. Adding the title to my Vintage TBR. Though I'm glad you mentioned that the mystery isn't just about drug running - I'm not big on drug plots. But I always like approaching storm plots. :)

John: You might catch up to me. I'm lagging on the Silver card, so I'm trying to catch up and get my two bingos (declared goal).

Freda: This did seem advanced (particularly withe drug theme). But there was enough "Golden Age" to make me happy.

Yvette: Yes--the storm plot is a good one.

Gram: This is the second Bristow and Manning books I've read. The other was The Ninth Guest (or The Invisible Host as John mentions it under its original title). They're both very good.