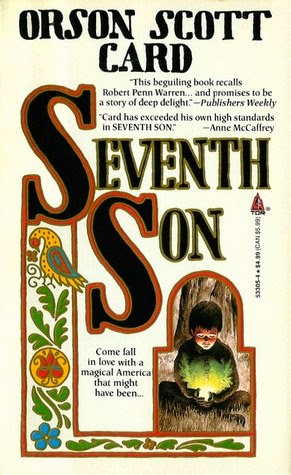 I'm sadly behind on this review...I actually finished the book on August 19 but between being generally brain-dead after a week of orientating graduate students and spending all evening for the last three nights watching "Whose Line Is It Anyway?" episodes/clips on Youtube, I just haven't gotten my act together on Seventh Son. But we'll give this a whirl so I can move on to other books....

Seventh Son is the first novel in Orson Scott Card's alternate American history series. It's set in the early 19th Century in an America where folk magic holds sway and the fate of the New World has taken a slightly different path. Yes, there are United States, but not quite the same ones as here in our timeline. Yes, there was a first president, but it wasn't George Washington. And there is an Indian Nation state that has representatives to vote.

In this world, seventh sons are magical and seventh sons of seventh sons are even more magical than their fathers--and quite rare. Alvin Miller, Jr. is such a one. In fact, Alvin is a Maker, a seventh son with the power to not only create new things out of old, but also to make things whole and to heal. He has a destiny that can help create a good positive future for America. But from the moment of his birth an ancient, dark force, the Unmaker, who will stop at nothing to destroy Alvin and prevent him from fulfilling his destiny.

I am just a bit torn on rating this one. I'm pulled towards a four-star rating by the world-building and the fresh, original feel to this American fantasy/alternate reality. The characters are delightful--particularly Peggy (Alvin's far-off "guardian angel") and Alvin and the writing is particularly strong. There is a character called Taleswapper who goes from place to place telling stories and collecting new ones and the entire book reads like a tale told by a grand old storyteller around the fire. But I'm also pulled toward a lower three-star rating by the infusion of religion. You want to create an America that's based on folk magic and secret powers? Cool.  You want to set up dark forces to destroy the ones who hold that power for good? Hey, absolutely.  I'm all for that Good vs. Evil thing.  But...can't we just do that within the folk magic scenario? That's why we created a whole different timeline America, right? I do get the whole Pilgrim/Puritan vs. "witchcraft" background. Salem and witch burning. I know it was part of the early days of America. But was it necessary to bring in religion and make those who represent it the bad guys?  Maybe it was--but when I was reading it just didn't settle right.

My other small quibble is that the blurb on my edition made much of the positive role of Native Americans in this version of America and, perhaps, since this is a series there will be more of a Native American presence in the following books.  But there is little here. The mention of those who have voting rights. And a man who is healed by Alvin (in an unexpected way) and who goes off to be a prophet to his people. But no real direct contact with Native Americans beyond that. When I specifically polled some of my friends for alternate history books that involved Native Americans, this series was one that was mentioned. I had hoped for more Native American influence in the opening novel.

Quibbles aside, Card is quite the storyteller in Seventh Son and the story was compelling and interesting. I will definitely be looking to read the next book in the series (Red Prophet--perhaps the title is an indication that there will be more Native Americans....).  ★★★ and a half.

Labels: 100 Plus, 52 Books in 52 Weeks, Author Author, How Many Books, Monthly Motif, Mount TBR, Outdo Yourself

Gosh, it's a long time since I read those, but IIRC there is a book just about the Native Americans--Red Prophet--and they do show up in other places in the series. I think Alvin goes to live with them for a while? Maybe? Whether you'll like it when you get there, I don't know, I can't remember a thing else.

There's also OSC's Pastwatch, in which some people go back in time to mess with Christopher Columbus and the entire American timeline.

I've heard great things about this author but have yet to read anything by him. I think I like this one, as it connects me to the Native Americans. I am Native Canadian, Métis, actually. This might be a good place to start reading his works. Great review!

I read this when I was a kid, but don't really remember much about it. I think I liked it, but my politics know would keep me from reading anything by him. I'll be curious to see what you think if you continue with the series.

Ryan: I haven't read anything by him for years--Ender's Game was the last (which I loved then)--and probably wouldn't now except this has been sitting on the shelf for so long that I wanted to read it before moving it out of the house (and count it for Mount TBR!).